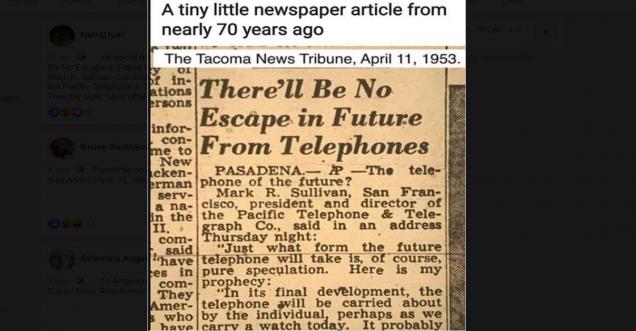 Fake news claim: An image of a newspaper clip viral on social media claiming to be from 1953, has made the right prediction of mobile phones with visual interface in the future.

The Phone of the Future !!!

An image supposedly showing a newspaper clipping from 1953 containing an oddly prescient prediction about future cellphones was circulated on social media in November 2019:

"There’ll Be No Escape in Future From Telephones" - Pasadena AP

“Just what form the future telephone will take is, of course, pure speculation. Here is my prophecy:

“In its final development, the telephone will be carried about by the individual, perhaps as we carry a watch today. It probably will require no dial or equivalent, and I think the users will be able to see each other if they want, as they talk.

‘Who knows but what it may actually translate from one language to another?"

The phone of the future, an article from 1953. pic.twitter.com/3Vtk2d6bqb

News Verification: It really takes a great achievement by the person who predicted such a great phenomenon, longer than 70 years back, when no one dared to think so ahead in the future.

Even in current generations, it is tough to dream of the next 20 years, but assuming in 1953, is truly a great achievement.

The newspaper clipping is available on websites like Spokane Chronicle, journal news and many other archive news from the past.