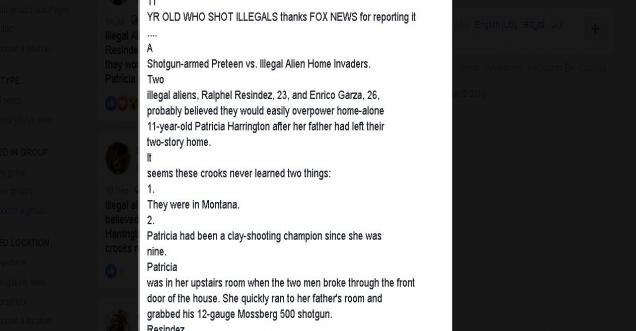 News Claim: A message viral on social media claimed that an 11-year-old girl armed with a shotgun defend her home from two illegal alien invaders by shooting them.

* Received this in an email and thought I’d share it with all of you!

Facts Check Analysis: The viral message has been shared by more than 1000 times on the social media and has over 2000 likes. Orginally published in 2006 and shared over the years.

The message went viral again in March, 2019 and is shared constantly over social media. Many users claimed of its authenticity, while many doubting if it is true.

According to the fabricated story, an 11-year-old Butte girl shot two “illegal aliens” with a shotgun after they broke into her home. The shooting supposedly took place on Nov. 5, 2006, according to Internet posts.

When asked about the authenticity of the events described in this story, Butte-Silver Bow Sheriff John Walsh told The Montana Standard in an earlier interview that his office never investigated such an incident.

It is a hoax and no information is available on internet regarding this.