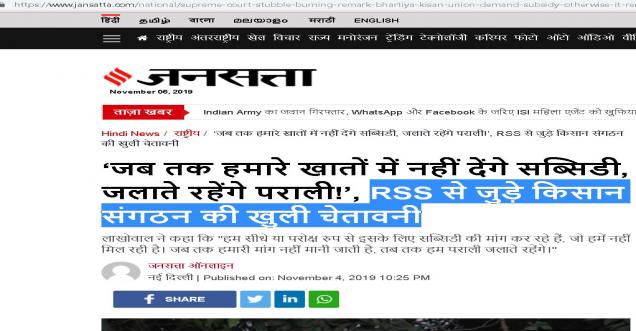 News Verification: The information giving by the two leading newspapers BBC and Jansatta is not true.

British Broadcasting Corporation (BBC) over the years has published much fake news in relation to the Indian context. In the current news, the BBC reported that Bharatiya Kisan Union (BKU) is associated with the Rashtriya Swayamsevak Sangh.

If you do one small search with Bharatiya Kisan Union, you would get the result of that BKS is part of RSS and not BKU.

The Bharatiya Kisan Sangh (BKS) (English: Indian Farmers' Collective) is an Indian farmers' representative organization affiliated with the Rashtriya Swayamsevak Sangh and a member of the Sangh Parivar. It has units in all states of India, with nearly 20,000,000 members.[citation needed] In March 2005, the Bharatiya Kisan Sangh urged the Government of India to set up a $20-billion fund for the development of agriculture infrastructure in the nation. In 2007, the BKS showed resentment with the ruling Bharatiya Janata Party (BJP) government in Gujarat. Dissatisfied with the prevailing cotton prices, it led to farmers' agitation in Saurashtra.

BKU is not affiliated or part of RSS.

Bharatiya Kisan union movement: Bhartiya Kisan Union Organisation fighting for rights of farmers since 1965. It has base in many states. It is associated to All India Kisan Coordination Committee(KCC) 0172-4511872

As per the news report deccanherald, just before the 2019 general election Bharatiya Kisan Union had announced support for Congress party.

A meeting of the BKU was held today under the leadership of Bhupinder Singh Mann, former MP and National President of BKU. The All India Kisan Coordination Committee has extended support to Congress.

Mann said, after extensive deliberations, it was decided that farmers should vote for Congress. "The BJP has shown a complete non-serious approach towards farmers, as they did during the last five years," he alleged.

This BKU is close with Congress and other parties and the information that BKU is affiliated or part of RSS is totally wrong.