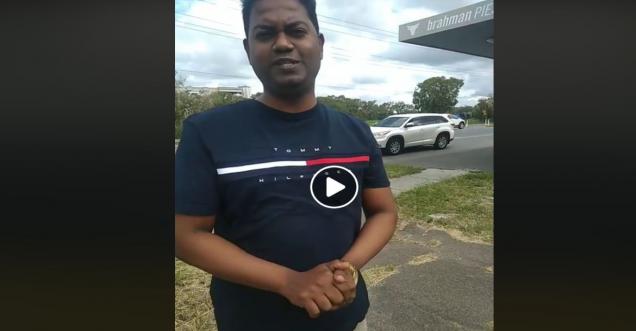 News Verification: The short video of 6 min 32 seconds has gained good views and shares on social media. The video has been viewed by more than 5.5 million times on Facebook and 141,429 shares. This is one of a classic example of how fake video is being spread on social media. When people support and like you on the basis of your ancestors.

The video posted by the grandson of Dr. Bhimrao Ambedkar, he mentions the company as 'Brahman Pies.

The company now has officially announced that it has nothing to do with the Indian society Brahmins and is fully owned by Australia.

It has come to our attention that there is a video doing the rounds on Facebook in India about our stores and the name ‘Brahman Pies’. While we don’t speak Hindi, enough people have contacted us to give a brief overview of the video in question.

We at Brahman Pies would like to set the record straight for the people asking questions.

-We are a 100% Australian owned company (not Indian)

-We named our pie shops after the Brahman Cattle which can be found on cattle properties all across Australia and are such amazing animals, if you have never researched Brahman cattle before please take the time to do so.

-The publisher of the video and his representatives have never contacted us by any means of communication for clarification of our name nor to inquire about the ownership of our amazing company.

-While the Internet can be a treasure trove of information there is also a lot of miss information and outright lies, this is one of those times.

We hope this answers your questions.

As per company, Brahman Pies is a premium pie brand and is a 100% privately owned Australian company. The company has over 100 years of experience;

As per okstate, The Brahman breed originated from Bos indicus cattle originally brought from India. Through centuries of exposure to inadequate food supplies, insect pests, parasites, diseases and the weather extremes of tropical India, the native cattle developed some remarkable adaptations for survival. These are the "sacred cattle of India," and many of the Hindu faith will not eat meat from them, will not permit them to be slaughtered, and will not sell them. These facts, in conjunction with he quarantine regulations of the United States, have made it difficult to import cattle from India into this country.

The Brahman breed originated in the United States of America in the early 1900s where it was developed from progeny of four Indian cattle breeds with some infusion of British-bred cattle. Early Australian importations of Brahman-type cattle can be traced back to the turn of the century. However, it was not until 1933 that significant numbers were imported by a syndicate of Queensland cattlemen in conjunction with the Council of Scientific and Industrial Research, later to become the CSIRO.Further imports of US bloodline Brahmans recommenced in 1982 with the opening of the Australian Government’s Cocos Island Quarantine Station facility. Our Australian Brahman breeders have welcomed this new genetic material. To early 1987, US and Brazilian blood Brahman imports through Cocos Island have topped 300 head with further shipments in the pipeline.

Australian Brahman beef cattle were developed by innovative north Australian cattlemen who appreciated the economic value of a beef animal which could adapt to harsh tropical climatic and environmental conditions. Initial evolvement of the Australian Brahman began in Queensland, north of the Tropic of Capricorn.