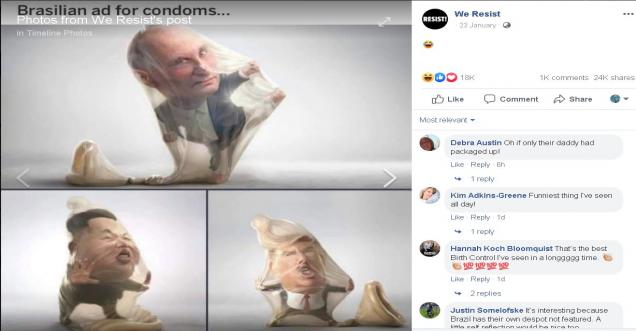 News Verification: The images of the respective leaders images were shared on a Facebook Page, We Resist, featuring the three leader in Condom, The post has been shared over 24 thousands of time and like over 18k times on Social media. There no such Condom in real, but art work and Photoshop images are present and shared over the years.

First the Photoshop image was created by Platinum FMD and uploaded in May, 2017.

The images of the three leaders was later posted on schleckysilberstein, in June,2017. The website stated, “The art directors of the Brazilian agency Platinum FMD were bored and developed a relatively convincing saver sex campaign with the testimonials Donald Trump and Kim Jong-un. You can do that shit in Photoshop, or neatly in 3D. Here are the decent results plus concept art.”

These images of Donald Trump, Vladimir Putin, and Kim Jong-Il have never been used for any commercial purpose.