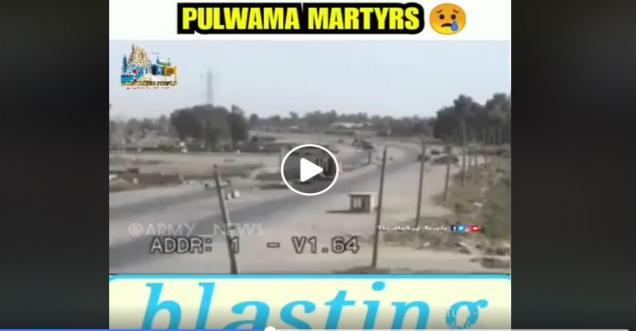 Viral Claim: Social media is viral with video of bomb blast, claiming to be of the  Pulwama Terror Attack | Jammu Kashmir

Facts Check Analysis: The video claiming to be the CCTV footage of Pulwama terror attack. People claiming that these videos are from the CCTV captured for the Pulwama is not true.

The video has been widely shared on the social media, due to the sentiments attached to the death of the Indian soldiers.

The original video is quite old, published on YouTube on Mar 5, 2008. On the description section of the video it is mentioned ..

I think that, mean the YouTube society reason for the Upload of this video wrongly understood. This is not considered as amusing. History to this video: I received this video from to friendly US a Army soldier. It was stationed at this time in Iraq. I`ve uploaded this video, in order to show, from which dangers the soldiers in the war locations to suffer to have. Whether this war from my view is meaningful, I cannot say here. The sense of this video: Do not forget the soldiers, who live it there risk.

We do not have authenticity of the blast and video, other than this video clips uploaded by some anonymous people.

The fact is that this video is not from the Pulwama terror attack, as the original video is much old than the recent incident.