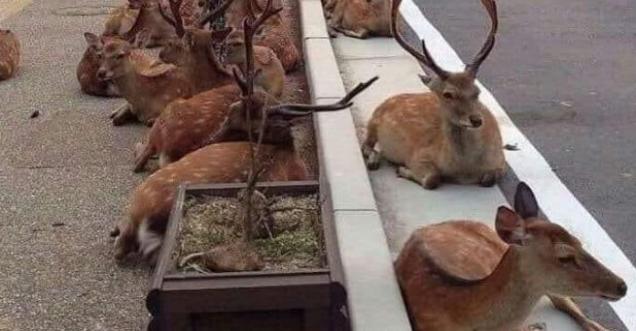 The text of this message says:

News Verification: Several users on Social media shared the image of dears making on to the streets of Ooty-Coimbatore road. The image is shared to state they are after the Humans have retreated back to their home environment post the Indian government locks down a period of 21 days.

On searching for the origin of the image we found the images published in other countries dating back to 2014. News published in japantodayin July 28, 2004, states that “Nara’s deer take over one of the city’s streets”

As per the website, this is a regular occurrence in late July, with the deer strolling out of the park to “enjoy the coolness of the street.” Given that the concrete sidewalk and asphalt road surface would ordinarily retain heat during the summertime, we’re guessing that the surrounding cityscape and topography creates either a cooling wind tunnel or an inviting patch of shade.

The video uploaded on YouTube by a user, BLUEBELLS9999 in July 2014. Where he uploaded the video of the herd of deer occupying the sidewalk.

The image of the deer has been shared by many users across the world and many claiming it to be of different regions, is from Japan.