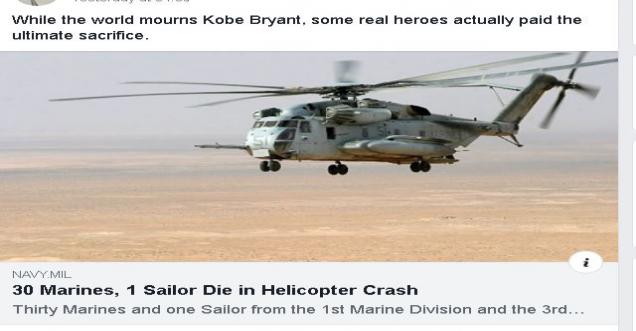 Fake news claims: People are confused with occurrence to two helicopter crash happened on the same day, however over different times. They are mourning for both the crash one for Kobe Bryant and others in 2005.

CAMP FALLUJAH, Iraq (NNS) -- Thirty Marines and one Sailor from the 1st Marine Division and the 3rd Marine Aircraft Wing of the I Marine Expeditionary Force died Jan. 26 when their CH-53E Super Stallion helicopter crashed near Ar Rutbah in the Al Anbar Province while conducting security and stabilization operations.

All Marines, Sailors, Soldiers, and Airmen of the I Marine Expeditionary Force mourn the tragic loss of our brothers in arms.

A recovery team is at the crash site, and the cause of the crash is currently under investigation.

The names of the deceased are being withheld pending next of kin notification.

"While we mourn the loss of these heroes, we will honor their sacrifice by continuing our mission to bring democracy to the people of Iraq," said Marine Lt. Gen. John F. Sattler, commanding general, I Marine Expeditionary Force. "To the families of these brave men, our heartfelt thoughts and prayers go out to you at this most difficult of times."

For more news from around the fleet, visit the Navy NewsStand at www.news.navy.mil.

News Verification: News published on navy.mil states that 30 Marines, 1 Sailor Die in Helicopter Crash on January 26, 2005. However, it is a bit confusing, as the dates are not quite visible.

Recently on 26th January NBA legend Kobe Bryant, died with his daughter and seven other passengers in a plane crash.  It was a tragedy and people all over the world were sympathetic to this incident.  However, some people also related to the death of some 30 Marine and 1 sailer to this unfortunate incident.

It understood from the way people are sharing both the news together, assuming both happened at the same time. Looks like something is wrong in the Google search algorithm, as another incident happened on 26 Jan 2005.

Both of these are making the people confused of the actual dates of the other incident, which was reported on 26 Jan 2005 and the other on 26 Jan 2020.