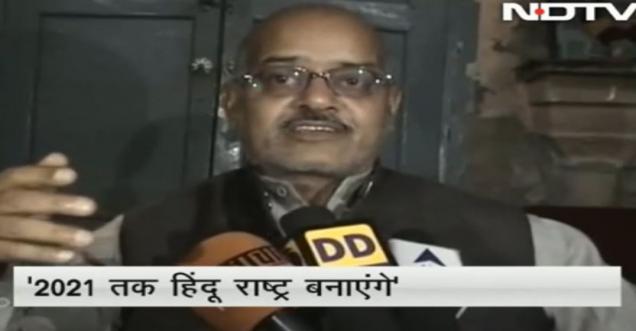 This is a member of India's ruling party openly boasting of his government's intent to ethnically cleanse 200 million Muslims and 28 million Christians.

BJP leader Rajeshwar Singh says Islam and Christianity will be finished in India by 2021.

This is a member of India's ruling party openly boasting of his government's intent to ethnically cleanse 200 million Muslims and 28 million Christians. pic.twitter.com/TRMPdhosYE

Facts Check: True, but the video is too old

In the video it can be heard Rajeshwar Singh’s statement of eradicating Islam and Christianity from India, by the end of 2021. The video was shared by Columnist CJ Werleman (Columnist for Middle East Eye and Byline Times. Host of @ChannelTheRage. Activist against Islamophobia).

First of all its 5 years old video. 2nd he is not belongs to any political party. @TwitterIndia any action against this religious hate monger. pic.twitter.com/9N3lEyoKCD

Rajeshwar Singh, An RSS pracharak since 1971, he was appointed Dharm Jagran in-charge of the Braj region in 1996. He was later put on leave after controversy over his ghar wapsi programme in Agra.

Several state RSS leaders that ET spoke to said Singh's removal was a fallout of top-level interactions between the RSS and BJP leadership including Prime Minister Narendra Modi in recent weeks. BJP leaders complained to the RSS leadership that the controversies surrounding conversion were taking the sheen off the government's "development agenda" and prevailed upon the Sangh to send out a message by removing Singh, they said. "All of our conversion programs are also on hold for now," one RSS functionary in UP

Rajeshwar Singh: Will finish Christianity and Islam in India by 2021

The ABP news shared by CJ Werleman is old as well, It was uploaded on YouTube on Dec 17, 2014.

Rajeshwar Singh was associated with RSS for a long time; later he was dumped by the RSS to take long leave, however, we have no records of him with the BJP party.