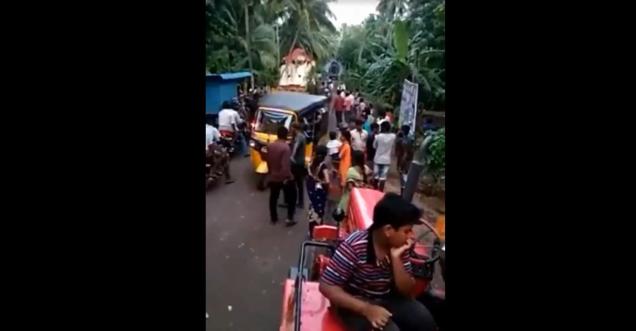 News Claim: The viral video claiming that Christians blocked a Dasara procession in Andhra Pradesh, may not entirely true.

Dasara procession of Durga Matha stopped by Christians, claiming it is 100 % Christian area.

As heard in the video and translated from Telugu, “Namasthe, these people are all Christians. They have stopped the (Durga) Matha procession, saying it cannot pass through their area. They have even physically attacked Hindus.” The camera then pans to a large hoarding, which seems to be declaring birthday wishes for a local resident, and the narrator says, “Apparently this cutout can be put out, but not Ram’s cutout. There’s a fight to not let (Durga) Matha to pass by. Do justice to all Hindus. Jai siva sakthi.”

Facts Check Analysis: The video viral on Social media claiming the famous Dasara procession being blocked by the Christians is not entirely false.

As local police have its own version claiming that there were some fireworks near to the location and this lead to some arguments between the locals.

As per the news reported by thenewsminute, by the time the police reached the spot, the issue was already resolved by the two groups of people.