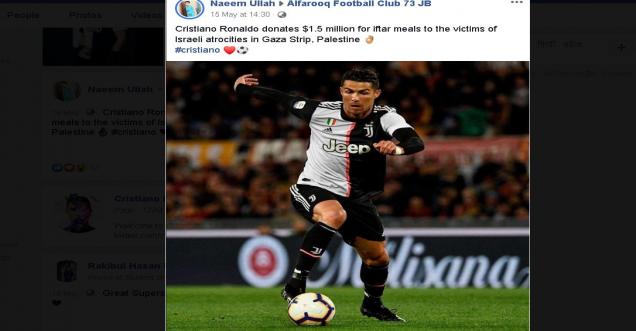 Viral Claim: rumors claim that Cristiano Ronaldo donated $1.5 million for iftar meals to the victims of Israeli atrocities in Gaza Strip, Palestine, is not true

The fake news was published on 9sportpro stating:

The Portuguese superstar Cristiano Ronaldo is known as one of the most human person in the world.

He often donates lot of money to help people with different problems but one of the places where Cristiano has helped a lot is Palestine. According to reports he has donated 1.5 million euros to Palestinians to feed them for iftar.

When this news become public lot of muslims from around the world has thanked Ronaldo for this amazing gesture.

Originally it was published in telesurenglish, which later corrected the news and said, “While multiple news outlets reported the news last week, on May 20, Ronaldo’s management agency Gestifute affirmed that the story is false.