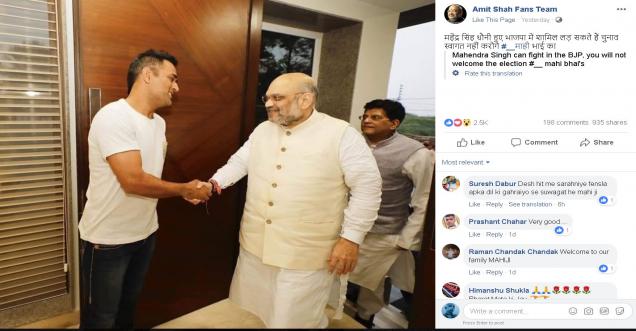 Mahendra Singh can fight in the BJP, you will not welcome the election #__ mahi bhai's

Facts Check Analysis  A facebook page claimed today that Indian Cricketer MS Dhoni has joined the BJP is not true.

The picture of MS Dhoni with BJP president Amit Shah is from 2018. The picture was taken just ahead of the 2019 general election and The motive behind the meeting with influential persons who belongs to various walks of life is to inform them about achievements.

Ahead of the General Elections in 2019 , the president of Bhartiya Janta Party (BJP) Amit Shah undertake an unprecedented step to meet with influential persons. Recently, the president of the party in power met Mahendra Singh Dhoni in Delhi as an extension of a fresh initiative.