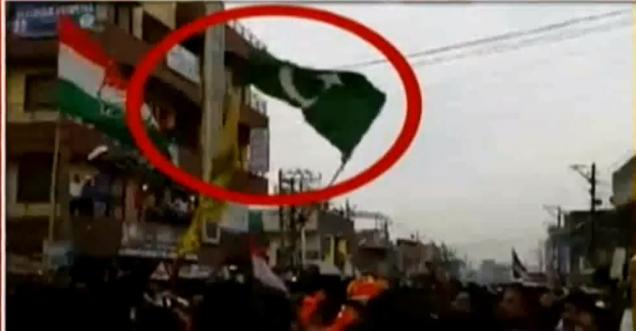 Viral Claim: A video showing a man waving Pakistan flag is going viral on social media platforms like Facebook, Tweeter, and WhatsApp. Someone has captured this video in Congress party rally in North Belgaum in Karnataka, and it has been claimed that the flag of Pakistan’s national flag was waved at the rally.

This is the Congress Party rally in Tumkur, Karnataka where Pakistan's flag were seen with party flag.

According to our investigation the green flag shown in the video is not Pakistan nation flag but if you browse and see the video you can find it is   IUML (Indian Union Muslim league) flag, which is different from the flag of Pakistan. Many times people get confused and make false claim. There are differences in Pakistan and IUML flag.

The Pakistani flag has a white band on the left side. Also, there is a difference in the colour and the angle of the crescent in both flags.

It is associated with the flag used by the All-India Muslim League as an emblem of its aim of achieving an independent Muslim state. Their flag was green, with a central white star and crescent.

The Muslim Youth League (MYL) leaders have come out with the suggestion that the party, which they believe is set to make a major foray into the north Indian states, must rework on the flag, especially the “Pakistani” effect on it.