A Post shared on social media group’s claims that Muslims split in food before sharing it to people of another religion. 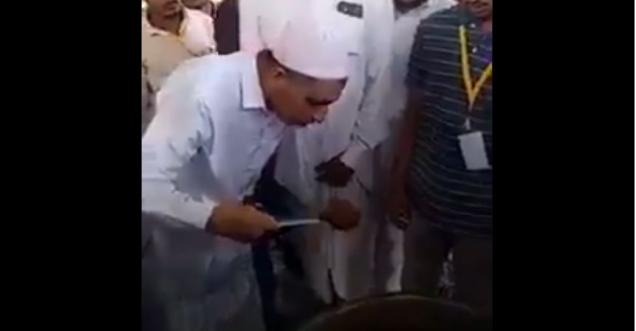 Fake news claim: A Post shared on social media group’s claims that Muslims split in food before sharing it to people of another religion.

As per their religion, they are supposed to spit in the food before serving it to people from other religion

How many proofs do u want? pic.twitter.com/qetsSOCfFT

So Secular Hindu fools who join #ShaheenBagh are eating this Biryani 🤮🤮🤮 pic.twitter.com/IEbRj0tzZN

News Verification: It is quite from some time that the video of a man splitting in food is viral on Social Media. It is mostly viral with Shia Muslims, claiming that they split in the food during the Muharram and so no Sunni is allowed to eat their food.

We checked with some of our Muslim friends what they said was it is just a gesture of blowing air in the food, actually, no one splits in the food. As you watch the video you can see the man in the video reciting certain prayers and blowing the air into the food.

A huge difference between the Shia and Sunni’s have given noise to this rumor more, one of a blog writes, “Most of the Sunni People I know, once told me of the traitorous qualities of the Shia. I hear that all Shia would always spit on the food and drinks that they would serve to their Sunni guests. Furthermore, they told me that the Shias perform the Taqiyyah, in which they tell Sunnis the exact opposite of the truth about their religion. Other people also tell me that they always say the exact opposite of whatever is in their heart to Sunnis. They also told me that; whichever Sunni is the closest to their life, they will curse them the most.”, so most of the thoughts are based on just assumption.

We did not find any relevant proof to support the claim that Muslims split in their food. Hence it is a Hoax.