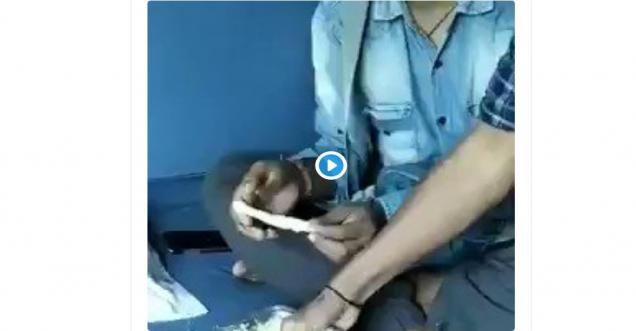 Be skeptical: A message was referred to PiyushGoyal  “please see that plastic rice are served to passengers in pantry car in Train No-15904 (Chandigarh to Dibrugarh Express). Hope you will act.”

Please see that plastic rice are served to passengers in pantry car in Train No-15904 (Chandigarh to Dibrugarh Express). Hope you will act

@PiyushGoyalOffc please see that plastic rice are served to passengers in pantry car in Train No-15904 (Chandigarh to Dibrugarh Express). Hope you will act. pic.twitter.com/FHIyXH05nt

Stop giving kenyans plastic rice and spreading cancer to our people we cant loose more people take the rice to your family https://t.co/u36jvNds3L

Twitter and other social media are buzzing with plastic rice from long time, than you would have received this message only recently. Most of this myth is only on the social media

Such incidents were also reported in past. On lab testing rice was found OK for human consumption without any plastic. It was revealed on ABP news channel that this happens only due to high starch contents in rice. ABP news channel declared such videos as False.

Many of the Plastic rice information is said to be coming from China, after all china is more expert in copying and bringing up new things. It all started from fake rice, to plastic rice.

As per news on Chinese fake rice is on shelves, which attributed to more of plastic rice from china. The news said, One Chinese restaurant association official warns that eating three bowls of ‘plastic rice’ is the same as eating one vinyl bag. A Chinese television report has alleged that a company in Xi'an, Shaanxi Province, has been producing a fake version of high-quality "Wuchang rice" by adding flavoring to ordinary rice.

There was news on plastic rice in Nigeria, Nigerian customs officials show that the product is "contaminated" but not plastic.

Most of this are just rumors of plastic being sold as rice, fake rice, Wuchang rice. None of them are true.

Food Safety and standards authority of India (fssai), busted the news on its website

It has been observed time and again that various fake news are circulated through social media channels such as youtube, whatsapp, facebook etc which has a wide reach among masses. These fake news are baseless and doesn't have any scientific facts related to them and due to its presentation, they create a situation of panic among citizens. With all the false and misleading information propagated through these mediums, FSSAI in consultation with the subject experts shares clarification on these fake news. FSSAI also urge citizens to neither believe nor circulate these fake news through their social media channels.

There is no technology or chemicals available to complete the manufacturing of whole eggs. Also, it is not economically viable process since normal eggs are available in abundance & at an affordable price.[+]

A thick eggshell membrane indicates the freshness of the eggs. When the egg is fresh, there is not enough time for evaporation to separate the 2 membranes (outer and inner layers) causing it to stick to each other. This makes it look thicker and stronger when it is peeled. Also, the inner shell membrane of the eggs may become harder & elastic when it is older than 15 days, which is a natural ageing process.

The reason why eggs differ from each other is because of difference in quality of feed, breed of bird, ageing of eggs & the handling of eggs.

As the egg ages, the egg white changes its consistency, becomes thin and runny and finally egg yolk and white dissolve into each other & this mixing is aggravated by temperature abuse & not because egg is made artificially.

Detailed information on egg quality and safety is available at  https://fssai.gov.in/cms/guidance-notes.php

Melamine has no known food uses. Melamine could be present in a food either on account of its incidental presence (as a contaminant) or due to deliberate addition (as an adulterant) for economic gains..[+]

It must be noted that use of melamine either as an ingredient or as an additive is not permitted in any food by FSSAI, although maximum limits for presence of melamine in food, including milk, have been prescribed to address the incidental presence of melamine as a contaminant. This is as per international standards and is based on a proper risk assessment with respect to consumer health safety. Setting up of such limits certainly does not mean that FSSAI allow addition of melamine to foods even within the specified maximum limit.

Detailed information on presence of melamine in milk is available at https://fssai.gov.in/all-whatnew.php

Wheat flour naturally contains 2 proteins – Glutenin- for elasticity & Gliadin- for raising of dough. In the presence of water, these 2 proteins bond together to create an elastic network of protein called gluten strings. Gluten is the rubbery mass that is left when wheat flour dough is washed with water & this is maliciously referred to as plastic..[+]

It is the natural phenomenon of rice to burn since it is a complex carbohydrate and since rice is 80% starch, it has cohesive and adhesive properties and when the rice is cooked and transformed into ball, the air gets entrapped & becomes bouncy like a ball. Thus, it should be ruled out that the rice contain plastic.[+]

The snacks such as namkeens and potato chips are mainly made of cereals, spices and oil and the carbohydrate and fat have a natural characteristic of burning when exposed to fire. Thus, it should be ruled out that they contain plastic.[+]