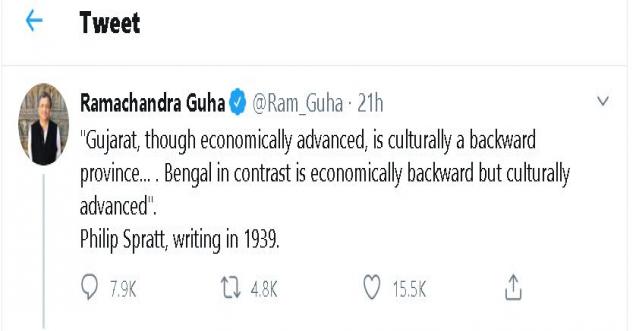 TRUTH & Verification: Whether Modi is in Gujarat or not the hatred towards a state, society, and section of people continues, whosoever Modi is attached with. Ram Guha, once again targeted the Gujarat model led by Narendra Modi and drew a comparison of Gujarat and West Bengal.

As per wiki, Philip Spratt (26 September 1902 – 8 March 1971) was a British writer and intellectual. Initially, a communist sent by the British arm of the Communist International (Comintern), based in Moscow, to spread Communism in India, he subsequently became a friend and colleague of M.N. Roy, founder of the Communist parties in Mexico and India, and along with him became a communist activist.

The re-quote by Guha also proves yet again that he has a communist mindset and still a colonial slave.

Vijay Rupani, the current Gujarat CM said, Earlier it was the British who tried to divide and rule. Now it is a group of elites who want to divide Indians.

Indians won’t fall for such tricks.

Gujarat is great, Bengal is great...India is united.

Our cultural foundations are strong, our economic aspirations are high.

Earlier it was the British who tried to divide and rule. Now it is a group of elites who want to divide Indians.

Indians won’t fall for such tricks.

Gujarat is great, Bengal is great...India is united.

Our cultural foundations are strong, our economic aspirations are high. https://t.co/9mCuqCt7d1

Sitaraman responded to the tweet of Guha and said, In 1939, when Philip Spratt, from Britain, belonging to the Communist International wrote, (who ⁦⁦@Ram_Guha  quotes) this was what was happening in Gujarat: Jamnagar...Maharaja Jam Saheb Digvijaysinhji Jadeja...saved 1000 Polish children #Culture

There is many things wrong in Guha;s quote

Later Ram Guha, came back on twitter again and wrote, Statutory warning; when I post quotes by others found in the course of my research, I do so because I find them arresting in some way. I may (or may not) endorse, in part or in whole, what I am quoting. Reserve your praise or your anger for the ghost of the person being quoted.

Many users of social media pointed out the mistakes on Ramchandra Guha and proved they are more intelligent than the famous historian himself.

Philip Spratt called your inspiration, hero and the father of the nation, Mahatma Gandhi, “culturally backward” in 1939. You found it worth circulating in 2020. So have you changed your mind about Gandhi after eulogizing him in your books & essays in the last 15 years?

You talk as if Philip Spratt was your grandmother who was the authority on India or Gujarat or Bengal.... Only 3rd rate idiots have to depend on some foreign chameli quotes (that too some vague Spratt Vatt) for their stupid survival @Ram_Guha... https://t.co/MDLe0qBcLv

Guha, though known as intellectual, is morally corrupt.
~Anonymous 2020~

Silly man, Gujarat was created in 1960 if it Gujaratis u are referring to then talk about Somnath Dwarka Rani Vav Modhera; Poets like Narmad, Meghani, show me something that can touch ‘Vaishnava Jana To’ written by #NarsiMehta. Show me some place as ancient & vibrant as Dholavira

This is an ill informed statement

From Kutch to Vapi & from Shyamlaji to Dwarka,Gujarat’s culture is built on striking diversity but united through indomitable entrepreneurial spirit

Every culture has it’s unique greatness,backwardness is our failure to understand this fact https://t.co/IKCLOnf85I

https://t.co/wDva5ABpZI After distorting History books Gutless Guha opens up a new avenue of Gujarati/Bengali !looks like he is getting a free ride on somebody’s Tail ...! This Chuha Guha is not tired of being punchline of everyone’s jokes !@Ram_Guha