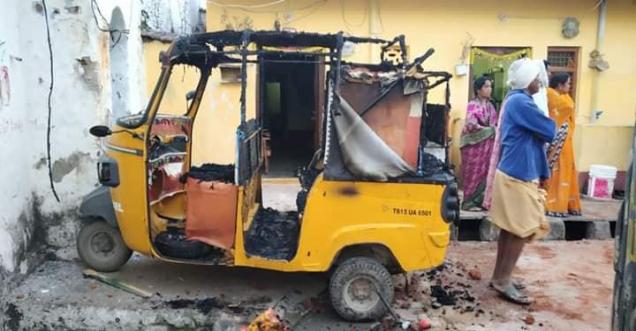 #Telangana police advised in its press statement that names & religion of victims and suspects of #BhainsaBurning town should not be disclosed by media??
Why it happens only when victims are Hindus and terrorists are Jihadists ??#Bhainsaattacked pic.twitter.com/vQWyHjt8a7

News Verification: This incident happened in bhansia in the Adilabad district in Telangana.

Tension prevailed when a group torched around 10 motorbikes belonging to another group following a communal clash in Bhainsa town on Sunday midnight. Armed forces, led by Superintendent of Police C Shashidhar Raju, were deployed in a colony of the town for preventing untoward incidents.

As per telanganatoday, Some unknown youngsters sounded the horn of his motorbike in a colony, titled Korva Colony, in the midnight, annoying the residents, who were asleep and reprimanded the bikers. Scores of members of a section, reportedly, rushed to the colony set motorbikes and some houses, belonging to another section, ablaze. They allegedly targeted the home of a right-wing organization’s leader.

Many people have shared of the incident from Telangana, however, the report has not come on the national television.

18 houses burnt,looted and scores of vehicles reduced to ashes in Bhainsa town, Telangana.
Large number of outsiders were in the town to take part in "Ijtema" pic.twitter.com/W4uOWm8iQl

"It was a petty issue which led to violence. Some people of a Muslim community were making noise by removing silencers from their bike and members of the Hindu community took objection. Arguments took place between members of both communities and later it led to stone pelting before some members got indulged into arson," a senior Telangana police official said.

Telangana-based Nizamabad MP Arvind Dharmapuri also alleged that a violent mob toning targeted the property of Hindus and their homes, set them on fire. He accused the local police of not being serious and said that the police are also with AIMIM as it has the support of KCR's party. He appealed to Home Minister Amit Shah to take action in this matter.