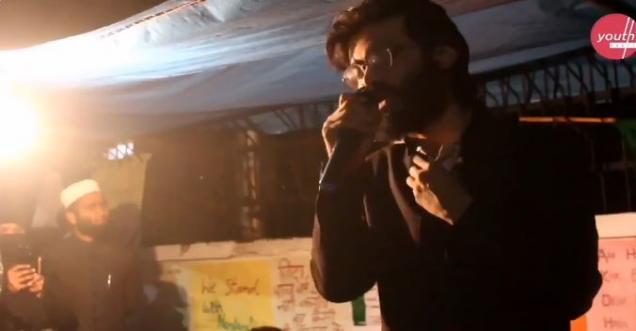 A video if many true Indian watches will feel afraid and think what type of country they are living in when a man in the open camera says to organize 5 lakh people and cut off Assam from India, maybe not for long but at least for a month. Also being a normal Indian we know nothing is going to happen to such people what so ever statement they make.

If nothing has happened to kanhaiya Kumar, nothing will happen to  Sharjeel Imam as well.

Watch the below video tweeted by Sambit Patra.

In the video the Imam says and it is really dangerous, “For example in Bihar there is a big rally every day, take the Kanhaiya Kumar rally where five lakh people were present, the problem with that is if we have five lakh people organized, then we can cut Hindustan and North-east permanently. Even if not permanently, for one or two months we can cut, put things on the tracks that they take one-two months to remove it. To cut Assam is our responsibility, Assam and India get cut then only they will listen to us...”

It doesn’t matter where he made the remarks it matters is why anyone living in India can make such remarks.

The fiery speech was given by Sharjeel Imam, who is a former Jawaharlal Nehru student, the same place from where often we have heard the statement of India tere tukde honge. Sharjeel  has made this statement as part of the protests against the Citizenship act at Aligarh Muslim University. The imam goes on calling of cutting Assam from the rest of India. he cites the example of kanhaiya kumar.

We have called off the Shaheen Bagh road blockade today to avoid the impending violence from party goons and to avoid politicization of the stage by parties. Police were probably asked not to intervene because BJP intends to intervene themselves. If that happens, our peaceful protest will be tarnished, and it will break the morale of the people. We have achieved a lot in the last 20 days, with the greatest among them was the participation of women and the peaceful way in which we have maintained this. We can block the road again in a few days if we retreat peacefully.
Our hundreds of volunteers who had been blocking the road and the women who have sleeping on the road have withdrawn from the protest site.
We request all of you to stop sending any assistance to this stage which has been now hijacked by political parties and cash hungry gangs who don't care about riots and its implications for the community.

We are planning to move into phase 2, and work on a flash mob strategy used by Hong Kong, and spread it across cities.
Please share it as much as possible.