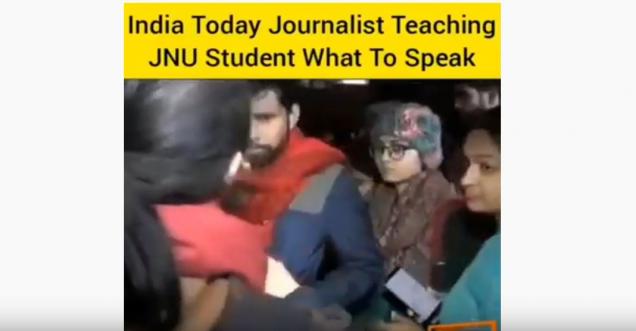 Fake news claim: A video viral on Social media suggests that everything is shown by India today group editor Rahul Karwal, claiming that AVBP was responsible for the JNU inside attack, turns out to be fake.

India Today Journalist teaching JNUSU vice-president Saket Moon what to speak on TV.
All this was planned for @rahulkanwal's show.

All this was planned for @rahulkanwal's show.

Look how the conversation went exactly how the India Today Journalist had prepared in advance pic.twitter.com/oR929Qo9HG

India Today journalist and JNUSU VP caught in a hush hush off the record conversation where she appears to be ‘coaching’ the person.pic.twitter.com/7qV8QBUSr2

News Verification: Multiple videos shared by social media users suggest that the video and questions put by the journalist and the answers said by the JNUSU vice-president Saket Moon was actually fed by the journalist into the mouth of the young leader.

There is history of news done by India today group where it’s journalist has been caught on TV Cameras teaching people what to say, that that it can benefit certain political parties or group, while ignoring the other and thus doing biased reporting.

India Today Journalists have long history of teaching crowd what to speak on TV. pic.twitter.com/dTaDu2ydfa

India Today group's Journalist was bribing a kid with 'quarter ke liye paise' to make him speak what he didn't want to. pic.twitter.com/tBQAZz2tun

India Today channel on the 10th of January 2020 aired a sting operation that they called a stupendous work of investigative journalism. In the sting operation, India Today claimed to unmask 2 ABVP activists who had supposedly indulged in retaliatory violence on the 5th in the Sabarmati hostel after they said that the Leftists had attacked the Periyar hostel. It was latter proved that India Today tried to passed off a JNUSU activist as an ABVP member simply to further a narrative.