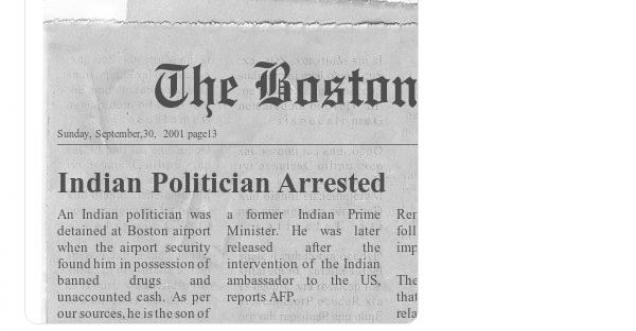 An Indian politician was detained at Boston airport when the airport security found him in possession of banned drugs and unaccounted cash. As per our sources, he is the son of a former Indian Prime Minister. He was later released after the intervention of the Indian ambassador to the US, REPORTS AFP.

@SirPareshRawal Blast from the past . . . You know who this Indian Politician is ! ! ! pic.twitter.com/Ep75U1kFDq

Well I know and all should know ! https://t.co/Q1intlelge

Facts Check News: The image of the newspaper clipping is shared by many, without knowing the authenticity that the news is fake itself. There is no such news published in any newspaper.

This is a virtual image created by a website where you can create any newspaper clipping with many options available. A sample news article created from the website www.fodey.com, can be viewed below.

There was another hoax created from this very website, regarding Delhi CM Arvind Kejriwal claiming, ArvindKejriwal raped a girl during his IIT days?

Is the report true? Did @ArvindKejriwal  raped a girl during his IIT days? Does anyone have a clue about outcome of case? #Kejriwal #Rape pic.twitter.com/Q2vAembt4P

Clearly the news article; created here is a fake and no truth at all.