Bengali language has been announced as second official language by the government of U.K. in London 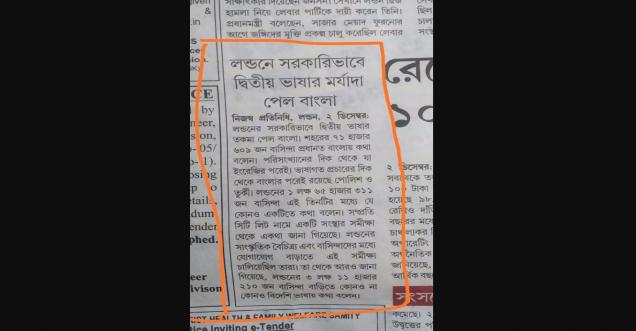 Fake news claim: A message popular on social media claim that Bengali has been declared the second official language of U.K

The Bengali language has been announced as the second official language by the government of the U.K. in London

The credit of making Bengali the second official language of London goes to Bangladeshis.

News Verification: No Bengali has not been declared as the second official language of the United Kingdom, London.

"English, in various dialects, is the most widely spoken language of the United Kingdom, however, there are a number of regional languages also spoken. There are 11 indigenous languages spoken across the British Isles: 3 Germanic languages, 5 Celtic languages and 3 Romance languages.
The de facto official language of the United Kingdom is English, which is spoken by approximately 59.8 million residents, or 98% of the population, over the age of three. An estimated 700,000 people speak Welsh in the UK, an official language in Wales and the only de jure official language in any part of the UK. Approximately 1.5 million people in the UK speak Scots—although there is debate as to whether this is a distinct language or a variety of English."

The Scots and the Irish Gaelic tongues are apparently mutually understandable.
Cornish has similarities to Breton and Welsh, and some signs in Cornwall are in both languages, as sign in Welsh.
Only Wales has TV programs in its own language.

Bengali is spoken by (0.4%) of the total immigrants., Apart from this we did not find any official communication on UK news or any other references that prove that Bengali is the second most spoken language in the UK.