The viral image of Aishe Ghosh wears her plaster on a different hand on different days is wrongly shared it is based on fake images created by flipping the actual photographs. 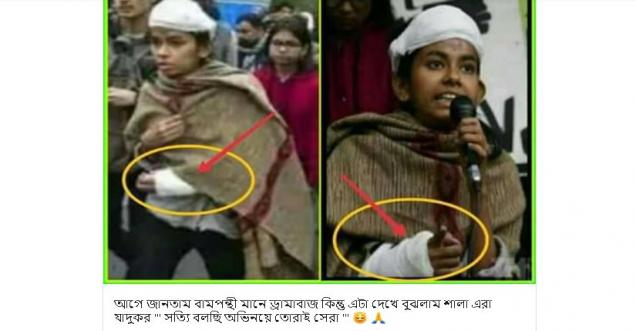 Fake news claim: JNUSU president Aishe Ghosh is trolling for all the wrong reasons, now an image of her has gone viral when the plaster on her hand has switched hands.

Dear @deepikapadukone @BDUTT @Shehla_Rashid @RanaAyyub @RahulGandhi We Hindus are waiting for your tweet & write-up about condemning JNUSU @aishe_ghosh & her goons in JNU violence. Also, please Apologize to the Hindus that you always rant as being fascist #LeftBehindJNUVoilence

She is a big time Communist actor pic.twitter.com/456ShEuybT

News Verification: No JNUSU president Aishe Ghosh did n not appear with the plaster on the right hand and left hand at different occasions, the image shared on social media claiming so is fake.

Delhi Police has named JNU Student union president Aishe Ghosh as part of the mob that led the students to attack the students in another hostel.

Apart from this Ghosh Image of injury shifting from one hand to another has been widely shared and has become a message of a joke by the right-wing supporters and mainly who does not approve of her. In some of the pictures the injury can be seen in the left hand and in many, it can be seen in the right hand. The message wonders if Aishe Ghosh wakes up every morning and decide which hand is hurt.

Her first image was taken from indianexpress, posted on January 7,  which published an image of her with the bandage on the left hand. It reported, FIR, filed in connection with the incident at the JNU server room on Saturday, names Ghosh and 19 others, accusing them of vandalism. (Express photo: Tashi Tobgyal)

Even as the Delhi police is yet to arrest those involved in the hours-long rampage at the Jawaharlal Nehru University (JNU) campus on Sunday, it has come under fire for naming students , including the injured JNUSU president Aishe Ghosh, in its FIR.

Based on the image published on indianexpress, we can say the image viral where the injury which can be seen on the right hand is actually a mirror image of the actual post. In the below video it can be seen the injury in the left hand.

Aishe Ghosh was injured on 5 Jan 2020, when unknown masked goons had launched an attack on several hostels in attack. Hence, it can be the concluded the messages claiming that Aishe Ghosh wears her plaster on a different hand on different days is false and it is based on fake images created by flipping the actual photographs.