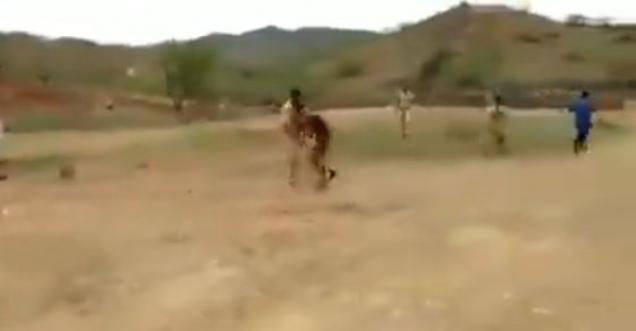 Brief Outline: A video shared on social media claiming of a man being burnt by the Indian arm force is not true, a fake tweet by Khaleej Mag

Khaleej Mag, as per twiiter is from Dublin, Ireland, shared the below tweet

Another Pakistan based user shares the same news on facebook as well.

The video is not from Kashmir, but from Rajasthan where a man immolates himself while protesting anti-encroachment drive, as reported by Timesnownews.

A 40-year-old man in Rajasthan's Budha village near Jaipur immolated himself to register his protest during an anti-encroachment drive on the land where he built his home, by forest officials on Sunday. Over 90 per cent of the victim's body has suffered burn injuries and is currently undergoing treatment in a Jaipur hospital. The police have launched an investigation into the matter.

According to reports, Baburao Saini, along with his family, has been long living on a piece of land in Budha village near Jaipur which now falls under government property as per a new survey report, thus making his house an encroachment on public property. When local forest officials tried to carry out an anti-encroachment drive at the disputed land, Saini set himself on fire to register his protest.