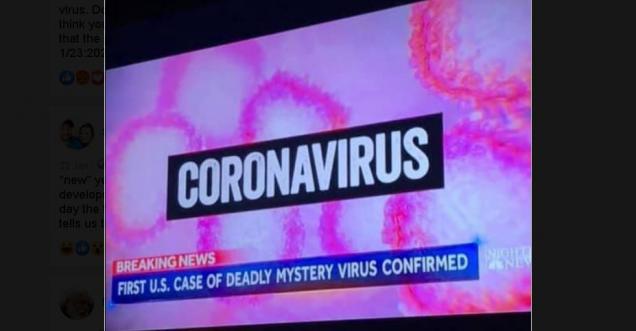 News Verification: At present several cases have been reported around the world. Till now the coronavirus has killed a minimum of 362 people, it has affected ore the 20000 people across the world and it has spread n more than 25 countries since it was first detected in the Chinese city of Wuhan in December.

The list mentioned in the viral image is correct as mentioned by CNN as well.

Coronavirus China: China is leading the world with the most number of cases in the country. So far 17, 206 people are affected by the deadly virus in China, which has killed at least 362.

Coronavirus US: The US has around 11 cases of Novel coronavirus.

Australian health authorities continue to test any people who show symptoms of the virus.

Cambodia confirmed its first case of coronavirus on January 27.

Cambodia reported its first case of Wuhan coronavirus on Monday -- a 60-year-old Chinese man who flew into the country from Wuhan with three family members. They tested negative for the virus, according to a Ministry of Information statement. The man's condition was stable and he only showed mild symptoms, it said.

Canada has confirmed four cases of the coronavirus as of February 2.

The fourth confirmed case is a woman in her 20s who arrived in Toronto from Wuhan on January 23 but was asymptomatic, according to the Ontario Ministry of Health.

Finland has one case of coronavirus. The patient, a 32-year-old woman traveling from Wuhan, arrived in the country on January 23, traveling the same day to a village in the northern Lapland region

The semi-autonomous city of Hong Kong, which borders mainland China, has confirmed 15 cases.

Hong Kong has temporarily closed some of its borders with China and stopped issuing travel permits to mainland tourists.

Macao, a semi-autonomous city in southern China, has confirmed at least eight cases of the Wuhan coronavirus.

Malaysia has confirmed eight cases -- all Chinese nationals. The cases include a 4-year-old child and a 52-year-old man, according to state news agency Bernama.

There was one confirmed case in Nepal -- a 31-year-old Nepali Ph.D. student who lives in Wuhan but flew to Nepal earlier this month. He was admitted to hospital in Kathmandu on January 13 but was subsequently released on January 17 after his condition improved.

The Philippines reported its first coronavirus fatality on Sunday -- the first death from the virus outside of mainland China.

The patient was a 44-year-old Chinese man who flew in from Wuhan in January, and who died on Saturday. He is the partner of a 38-year-old Chinese woman who was traveling with him, and who was the first confirmed case reported in the Philippines.

Singapore confirmed three additional coronavirus cases on Thursday, making the total number of confirmed cases in the country 13, according to a statement from the Ministry of Health.

Three more cases of the novel coronavirus were announced in South Korea Sunday, bringing the national total to 15, the South Korean Centers for Disease Control and Prevention (KCDC) announced in a news release.

Spain confirmed its first case Friday, according to a statement from the Health Minister's Office. The statement said the patient is currently under observation at a hospital in La Gomaera, a small island that is part of the Canary Islands.

There is one case of the Wuhan coronavirus in Sri Lanka.

A statement from the health ministry assured residents that local hospitals were prepared to handle any further outbreak. The government is contacting people who may have come into contact with a single case to detect potential contagion.

Sweden on Friday confirmed its first case, a woman in Jonkoping county who had visited Wuhan.

When the woman landed in Sweden on January 24, she was free of symptoms of the infection, but later developed a cough and contacted a local hospital, Sweden's Public Health Authority said in a statement. She was isolated in the hospital's infection clinic but is not seriously ill.

The CDC says that Taiwan's latest case, a man in his 40s, is the husband of the ninth confirmed case. He returned to Taiwan from Wuhan on January 12 and developed symptoms of upper respiratory infection on January 21.

Thailand confirmed a further five cases on Friday, bringing the total number to 19.

Four out of the five new cases are Chinese citizens from Wuhan. The fifth case is a Thai taxi driver. He is the first Thai citizen infected with the virus who has no record of traveling to China. However, he was exposed to individuals who had traveled from China. Two of the 19 cases are Thai citizens.

A new case of coronavirus has been reported in the UAE, making that the fifth case in the country, the Ministry of Health and Prevention announced on Saturday.

The UK has confirmed its first two cases in the northwest of England, according to a statement Friday by the chief medical officer for England.

There are now 11 cases of the novel coronavirus in the United States.

On Saturday, the country announced its sixth case, a 25-year-old hotel receptionist in Khanh Hoa province. The government did not give any more details.

France ( at least 6): There are six confirmed cases of the coronavirus in France, the first European country to be affected. The most recent was a doctor who contracted the virus after treating patients.

India ( at least 3) India has confirmed 3 cases confirmed to the coronavirus, this case has been reported from Kerala.  Kerala govt declares state calamity after third student tests positive