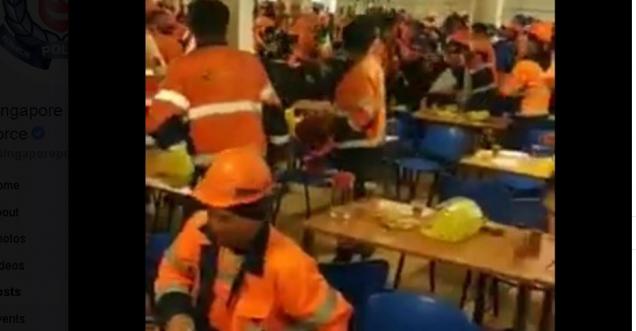 Viral messages on social media: A video is shared with the wrong context, the incident at a gas processing plant in Russia; however, it is being shared as from Singapore.

This afternoon at Keppel Shipyard cantenn,Myanmar vs China Shipyard workers.😅😂🤣

Facts Check Analysis: The video shared as incident with fights between Keppel Shipyard cantenn,Myanmar vs China at a shipyard in Singapore is not true.

The video has been viewed and share by more than 20,000 people on Social Media as of now.

The video is not from   Singapore, but from a fight in a canteen at a gas processing plant in Russia in September 2019;

steer.ru, a Russian news website published for the same incident o Sept 12, 2019 as “Workers staged a tough mass brawl in the canteen of the factory: video”. The website reported, The network was blown up by shots of a workers' brawl in the Amur Gas Processing Plant, which occurred today during lunch in the dining room. The reasons for the incident are still unclear, however, as some particularly active subscribers suggested, this could be a domestic conflict. In the frames of the video that hit the Internet, you can see a huge group of men who are wearing uniforms and helmets. Judging by the sounds coming from the room, the men sorted out the relationship. However, the situation went too far and chairs were used. They began to throw at each other, accompanied by selective abuse. Video, like furniture flying around the dining room, only miraculously without crippling people. One can only guess about the number of victims. After all, the exact causes of the incident are not yet clear. The video has become viral and currently leads in the number of views on social networks.

The Singapore Police Force, also shared the below video officially on, Oct, 2019, stating

[MASS BRAWL DID NOT HAPPEN IN SINGAPORE]

The Police would like to clarify that the video circulating online that showed a mass brawl involving workers did not happen in Singapore.

Members of the public are advised not to spread untruths which can cause unnecessary public alarm.

Hence, The claim is false, as; the video is being shared in a misleading context, it actually shows an incident at a gas processing plant in Russia, however shared as from Singapore.