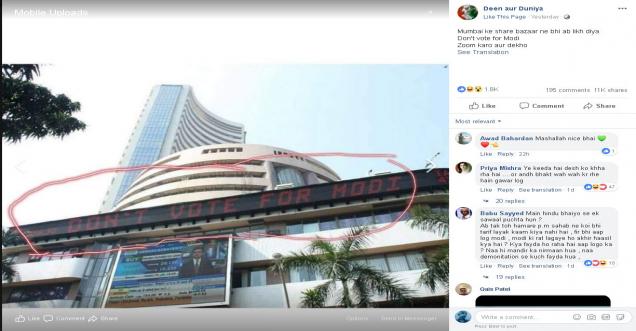 Viral Claim: A post viral on social media and highly shared by the users as well claims that the Mumbai Stock market flashed don’t vote for Modi.

Facts Check News: The image originally shared by a Facebook group Deen aur Duniya, has been shared by more than 11k people on the facebook and has been widely shared on the other social media groups like whatsapp and twitter as well.

We did not find any truth about this viral message. Image of the Bombay Stock exchange is widely available and any one can use it and edit and upload in the social media.

Established in 1875, BSE (formerly known as Bombay Stock Exchange Ltd.), is Asia’s first & the Fastest Stock Exchange in world with the speed of 6 micro seconds and one of India’s leading exchange groups. Over the past 143 years, BSE has facilitated the growth of the Indian corporate sector by providing it an efficient capital-raising platform. Popularly known as BSE, the bourse was established as ‘The Native Share & Stock Brokers’ Association’ in 1875. In 2017, BSE became the first listed stock exchange of India. The original image can be seen at the home page of bseindia.