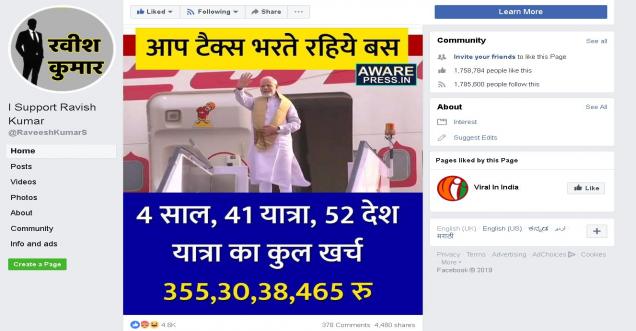 Facts Check Analysis: The claim by a facebook group regarding PM Modi of 41 trips and he travelled to 52 counters and spent more that 355 crores on his foreign travels is not correct.

As per pmindia, the PM has visited a total of 49 countries, the last being where the South Korea, for which the Bill has not been received. The content of the website is managed by the Prime Minister’s office.

Back in Dec, 2018, Minister of State for external Affairs V K Singh listed that PM from

A total of over Rs 2,021 crore was incurred on chartered flights, maintenance of aircraft and hotline facilities during Prime Minister Narendra Modi's visits to foreign countries since June 2014 , so as per the facebook post by I support Ravish Kumar is much less than the actual figures.
Modi visited over 55 countries in 92 foreign trips since taking over as prime minister in May 2014. However he also made multiple visits to some countries.

PM Modi travelled to many strategic important countries like china, US, Japan, but also to many small countries for the first time by any Indian prime minister. His foreign trips were diplomatic success, which was in full force when Pakistan returned, Indian Pilot  Avinandan Varthaman back to India, afer extreme pressure from foreign countries..