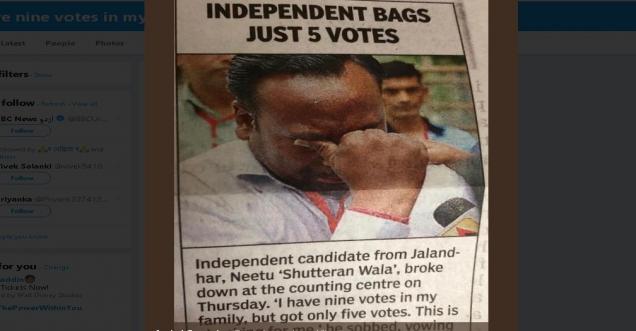 Viral Claim: A viral video of a Businessman Neetu Shutteran Wala breaks down, stating “I have nine votes in my family, but got only five votes. This is shocking for me: Neetu Shutteran, Independent Candidate from Jalandhar”.

Businessmen Neetu Shutteran’s emotional breakdown after the counting of votes attracted a huge media attention yesterday at the counting center.

He breaks down, quoting, “I have nine members in my family but got only five votes and this is shocking to me.” He further vowed to never contest any election in the near future.

Translated: Neetu Shutteran Wala, The family also did not vote

Facts Check News: The news about 9 member family and voting only 5 to the independent candidate is viral on social media.

The information shared by Neetu Shutteran Wala is not true he has 856 votes. As per ECI

In the elections, there are many rounds of counting. It looks like either Neetu Shutteran Wala did not see the results correctly or had wrong information at the time of his talk with the reporter.