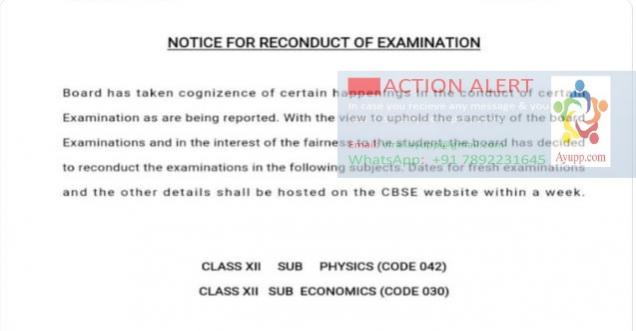 Viral Claim: Fake information being shared over the Social media that the CBSE is going to reconduct the Class 12 physics, economics exams

Board has taken cognizance of certain happenings in the conduct of certain examination as are being reported. With the view to uphold the sanctity of the board Examination and in the interest of the fairness to the student, the board has decided to re-conduct the examination in the following subjects, Dates for fresh examination and the other details shall be hosted on the CBSE website within a week.

No, CBSE is not going to reconduct any exams and especially not the class 12, physics and economics exams.

The cbse.nic, issued a public advisory stating that such messages are being circulated on the WhatsApp. In sharp words, the CBSE stated that “This is brought to the notice of Stakeholders that the news of re-conduct of Physics and Economics of Class 12 is fake”

The notice spread on social media is fake and photoshopped.