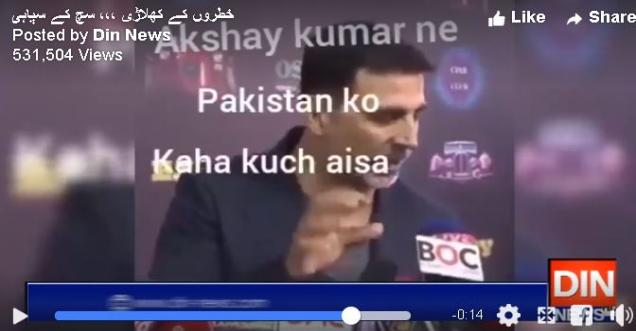 Viral Claim: A cropped video viral on the social media especially in Pakistan where the Indian Actor can be heard unsympathetic towards the Indian soldiers who died in the Feb 14 attack.

The viral video is shot in 2015 from one of the movie premier of the actor, Baby.

Facts Check Analysis the viral video, which is part of a long video. Akshay can be heard saying that terrorism is not in a country, but present in some elements. Terrorism is in many different countries. The video is shared in the Pakistan news channels and widely in the social media.

If Pakistan people have watched the original video from before they would not have shared the video. The video is from Premiere of the movie Baby. Immediately after the comment when the anchor asks him if Pakistan is not spreading terrorism than why the movie is banned in Pakistan. To this question the actors ducks the question. He says, Pakistan will better know why they banned the movie. He further says he even don’t know if it is banned or not.

Watch the below complete Video from the Baby Premiere.

Out of this orginal video, some video has been cropped to show it as if Akshay Kumar is lauding Pakistan.