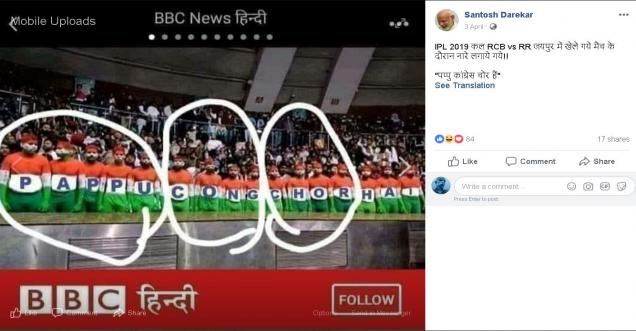 Viral Claim: A photoshopped image started with Chowkidar chor hai and then later to Pappu Cong chor has been widely shared as a picture from IPL 2019.

This was also reported by BBC Hindi (archive link)

Facts Check Analysis: Both of these images are not real, though some slogans were raised against the PM Modi.

In the IPL 2019 at Jaipur Chowkidar Chor Hai Slogans Raised At Jaipur Match.

😂😂 so funny! "Chowkidar Chor Hai" at the IPL match, yesterday.

The entire country seems to be speaking in one voice.. "Chowkidar ...?" pic.twitter.com/1S1Quw5oGD

A video was posted by India Today Social on Jan 30, 2019, titled “Here are the glimpses of how Congress’ Yuva Kranti Yatra ended!”. In the video as can be seen a bunch of people colored in different alphabets and text as Chowkidar Chor Hai.