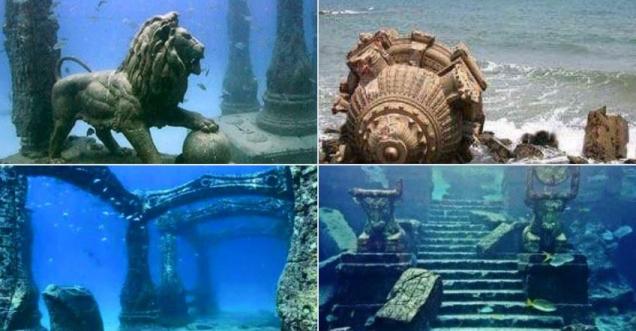 News Claim: A message viral on social media claims, “Shri Krishna's Dwarka, The sunken city in Gujarat. As described in the Mahabharata. It is real yet the Christian world says there is no proof!”

Shri Kishna’s Dwarka, The sunken city in Gujarat. As described in the Mahabharata. It is real yet the Christian world says there is no proof! #JaiShriKrishna pic.twitter.com/hQGDXzLC51

Shri Kishna’s Dwarka, The sunken city in Gujarat. As described in the Mahabharata. It is real yet the Christian world says there is no proof! #JaiShriKrishna pic.twitter.com/pBhbMBmG69

Facts Check Analysis An image viral on Social media claiming of the Ancient city of Dwarka.

Dwarka is an ancient city in the northwestern Indian state of Gujarat. It’s known as a Hindu pilgrimage site. The ancient Dwarkadhish Temple has an elaborately tiered main shrine, a carved entrance and a black-marble idol of Lord Krishna. Dwarka Beach and nearby Dwarka Lighthouse offer views of the Arabian Sea. Southeast, Gaga Wildlife Sanctuary protects migratory birds and endangered species like the Indian wolf.

The image has been widely shared by users on social media claiming, Shri Krishna's Dwarka, the sunken city.

These images are not from Dwarka

1st pic- Franck Giddio discovered this off the coast of Egypt in 2000.

Many references of the same image points out that this is another location, not Dwarka

2nd pic- This is 13th-century derelict temple from Tharangambadi.

The second picture is from Tharangambadi temple.

Tharangambadi, formerly Tranquebar, is a town in the Nagapattinam district of the Indian state of Tamil Nadu on the Coromandel Coast. It lies 15 kilometres (9.3 mi) north of Karaikal, near the mouth of a distributary of the Kaveri River. Tranquebar was the first Danish trading post in India established in 1620. King Christian IV had sent his envoy Ove Gjedde who established contact with Raghunatha Nayak of Tanjore. The Danish government sold the colony of Tranquebar to the British East India Company in 1845. Until then, an annual tribute had been paid by the Danes to the Rajah of Tanjore.

Port Royal is a village located at the end of the Palisadoes at the mouth of Kingston Harbour, in southeastern Jamaica. Founded in 1518 by the Spanish, it was once the largest city in the Caribbean, functioning as the centre of shipping and commerce in the Caribbean Sea by the latter half of the 17th century.[1] It was destroyed by an earthquake on June 7, 1692, which had an accompanying tsunami. Severe hurricanes have regularly damaged it. Another severe earthquake occurred in 1907.

4th pic- This is Thonis-Heracleion - Egypt.

Heracleion, also known by its Egyptian name Thonis and sometimes called Thonis-Heracleion, was an ancient Egyptian city located near the Canopic Mouth of the Nile, about 32 km northeast of Alexandria. Its ruins are located in Abu Qir Bay, currently 2.5 km off the coast, under 10 m of water. Wikipedia