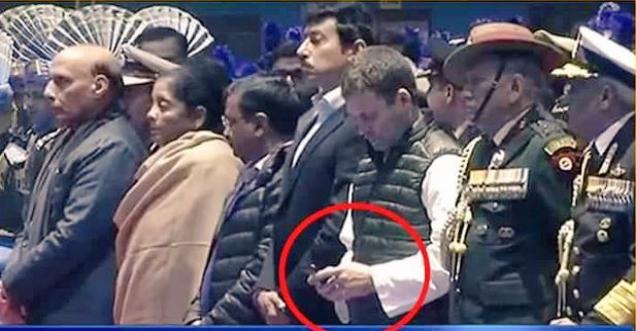 Viral Claim: Multiple post claim that the Prime Minister Narendra Modi posing for camera and Rahul Gandhi playing around with his mobile during Paying their Tribute to Mortal Remains of CRPF Martyrs at Delhi Airport

Call might have come from Mani Shankar Aiyer / Salman Khurshid who used to visit Pakistan and appeal Pakistan authority to help Congress to defeat #Modi. pic.twitter.com/7Gm8ICbWD8

You are right kashyap pic.twitter.com/arcOAhTSfy

Facts Check Analysis: Both this images are from the Delhi Airport where the PM and several prominent leaders gave their last respect the Martyrs.

All the leaders gathered on 15th February to give their respects to the Pulwama martyrs.

Prime Minister Narendra Modi Pays His Tribute to Mortal Remains of CRPF Martyrs at Delhi Airport.  The PM in the video below can be seen walking to almost all the coffins drapped in the tricolor, with folded hands and head bowed. The picture taken is just out of context.

If you see in the below video starting at 58.60 seconds, Rahul Gandhi can be seen taking out his mobile just for a short while and texting some message. The picture viral on the social media as well is out of context.

Note: beware of people who spread such news out of context

Understanding fake news, why It has got bigger over the Internet