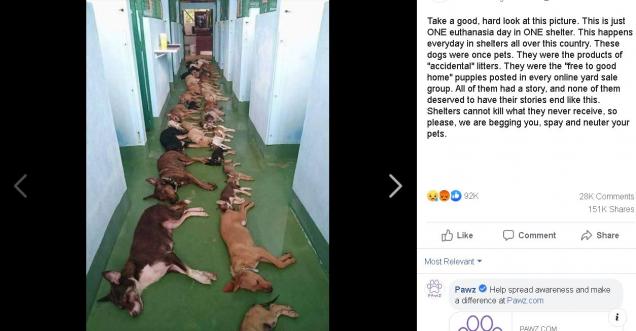 Take a good, hard look at this picture. This is just ONE euthanasia day in ONE shelter. This happens every day in shelters all over this country. These dogs were once pets. They were the products of “accidental” litters. They were the “free to a good home” puppies posted in every online yard sale group. All of them had a story, and none of them deserved to have their stories end like this. Shelters cannot kill what they never receive, so please, we are begging you, spay and neuter your pets.

Facts Check News: A quick search of the image on the social media shows that the image is available since 2017.

An unverified claim by wansmeal, states that “remember what was where in the shelter slaughter of euthanasia say the name of the people died of had been killed everyone humans this It does not look like sleeping comfortably looking at the dogs’ faces, I live area of the shelter are euthanized at 5 o’clock every morning

and become such a scene, ”, stating that the Dogs are indeed killed

Another website solidarnozazivotinjeiprirodu  claims that, The smallest part of their “wisdom” is a description of the euthanasia method, which, according to the Fascist concentration camps, mentions gas fuels - gas chamber,  (can you imagine this degree of evil?). These photographs were taken in “humane” Belgium, beginning in 2017: