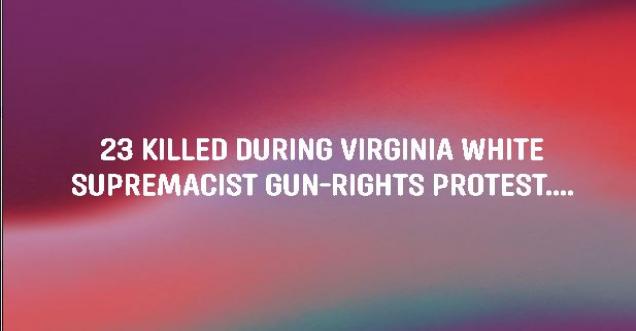 Fake news claim: On Jan. 20, 2020, the Genesius Times website published a satire story, which many users on social media believed it to be true. It states "At least 23 people were killed at a Jan. 20, 2020 Second Amendment rally in Richmond, Virginia."

At least 23 people were killed at the white supremacist Second Amendment Rally in Richmond, Virginia today, authorities reported. Many more were injured. Details are forthcoming.

UPDATE: Governor Ralph Northam has issued a statement condemning the senseless violence and the gun rights activists. “Our thoughts and prayers are with the families of those innocent victims today. We must do everything we can to end the mass killing of innocents!”

UPDATE: We are being told that the killings didn’t happen at the rally but nearby at an undisclosed location.

UPDATE: The location of the killings was 201 N Hamilton Street, Richmond, VA. It’s uncertain if this location was associated with the gun rights rally. Apparently there were no fatalities at the actual gun rally despite many people openly carrying weapons of war.

News Verification: The news published by Genesius Times is pure art of fiction and not true. The article on the website is not real in the event.

If you scroll down of the website, you come to a section where it is mentioned as Times

We strive to provide the most up-to-date, accurate fake news on the Internet. Our team of journalists, hacks, and starving writers only want one thing: to make you laugh and/or cry.

Many readers fails to notice the comment by the website and hence assume it to be real.