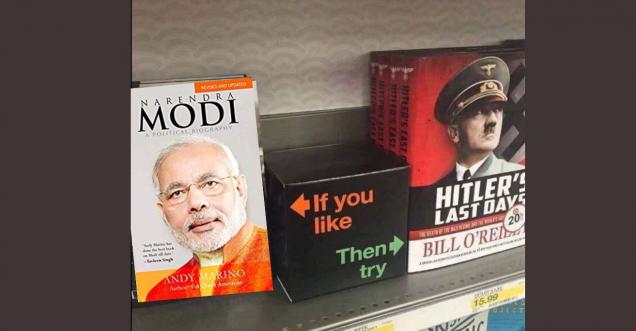 News Claim: A book of Narendra Modi, kept on the shelf of a book store, claiming to be from Mumbai Airport, stating if you try this you have to try Hitler’s Last Day

Saw this on Mumbai airport. pic.twitter.com/GEFtiGNlSr

Facts Check Analysis: The Image of the book of Narendra Modi alngwith Adolph Hitler is widely shared on social media, claiming to be seen at Mumbai Airport.

If you watch closely the picture of the book of Narendra Modi, you can see the image of the book is put on the top of another book through easy editing.

The actual image is quite old and being shared since 2016 and active on social media.

#recap This bookshop is trolling #DonaldTrump in a very pleasing wayhttps://t.co/G9L7OVsxhn pic.twitter.com/Slqdcb8zWS

Published by thepoke, Well done to the naughty bookshop that placed Donald Trump’s Crippled America next to Adolf Hitler’s Last Days with the phrase, “IF YOU LIKE THEN TRY…”

This bookshop is trolling Donald Trump in a very pleasing way