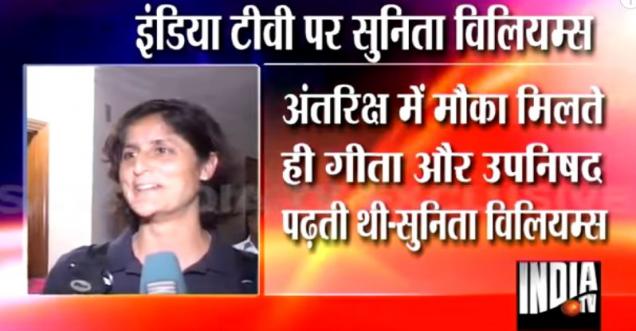 Facts Check: A Facebook post claims that Sunita Williams, Indian origin astronaut has converted to Islam is not true.

As per a Pakistan based website webcitation (Archive link)

Sunita Williams ( First Indian woman who went on a space journey few months back) accepted “ISLAM” Masha Allah, bcoz when they were on the moon, they saw towards EARTH, the entire EARTH looked dark, but 2 places on the EARTH GLITERED & looked like SPARKS (Roshni). They were shocked to see that and saw them with the help of telescope and came to know that those two places were “MAKKAH” and “MADINAH” Masha Allah!. Then they decided that after reaching to earth they’ll accept “ISLAM”.  So be proud u’r a muslim. Allah Hafiz…!

A video posted by India today in 2013, where she can be heard saying that she did carried Gita and Upanishads to the space, however she didn't find time to read books.

News published on cntraveller, on the question being asked that “Are rumors that you converted to Islam after seeing the lights of Mecca and Medina from space true?”

I don’t know where that started. It’s not like I mind and I don’t have favoritism for any religion. But my dad is Hindu and I grew up trying to understand, what Krishna, Ram and Sita means? My mother is Christian, so then, what does Jesus mean? Me personally—not something to do with NASA—I do think there is a God and it’s somebody looking out for us and trying to guide us to live a very happy, productive life. There is further meaning. That’s just my thought.

Clearly the news given by webcitation is also fake, which is viral since 2008.

Any news related to the conversation of the religion of the Indian born astronaut, Sunita Williams is fake and false.