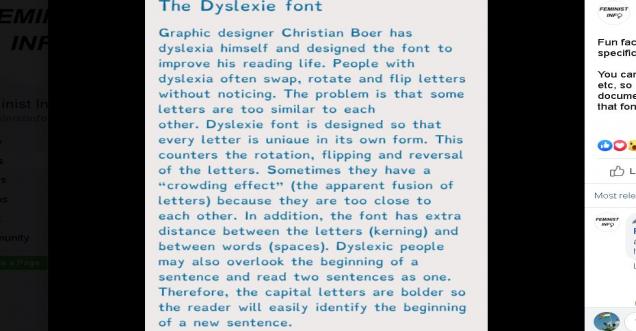 Fake news claim: A message popular on social media claim that The Dyslexie font can be highly helpful to people suffering from dyslexia.

Fun fact of the day! There’s a font designed specifically for dyslexic people to read easier.

You can install on your tablets, laptops and browers etc, so not only can you change things like documents into it, you can change websites into that font as well!

Graphic designer Christian Boer has dyslexia himself and designed the font to improve his reading life. People with dyslexia often swap, rotate, and flip letters without noticing. The problem is that some letters are too similar to each other. Dyslexie font is designed so that every letter is unique in its own form. This counters the rotation, flipping and reversal of the letters. Sometimes they have a “crowding effect” (the apparent fusion of letters) because they are too close to each other. In addition, the font has extra distance between the letters (kerning) and between words (spaces). Dyslexic people may also overlook the beginning of a sentence and read two sentences as one. Therefore, the capital letters are bolder so the reader will easily identify the beginning of a new sentence.

News Verification: Dyslexia is a problem with the acquisition of reading decoding and/or spelling.

There is no evidence to support this claim that Dyslexie fonts aids reading.

The typeface was designed by Dutch graphic designer Christian Boer in 2008 while he was majoring in graphic design at the University of Twente. He had himself struggled with dyslexia for much of his life.

Dyslexie uses a heavier line thickness to emphasize the bottom of most characters. This is to try to 'anchor' the letters since some people with dyslexia may see letters either moving or in three dimensions. Since dyslexics tend to get b, d, p, and q mixed up, it also emphasizes a slight slant downwards on the curvature of the letters. Letters such as c or e may gape slightly more, or slump slightly in one direction. Also, in letters such as n or h, the font slightly elongates or diminishes the stem on the letters. So the letter h would have a longer line, and n would have a lower line. In addition, the font also thickens or bolds capital letters and punctuations, so that it is easier to identify when a sentence starts or ends.

Research does not suggest that the font is beneficial in aiding reading. Neither children with or without dyslexia read faster or more accurately with the font.

No research to date has found a statistically significant beneficial effect on reading for dyslexics from any font specifically designed for dyslexia.

Apart from this there are other researches that are in support of Dyslexie claiming it has positive effects on children’s.

So we keep it in mixed category, as we don’t have much information to support the claim.