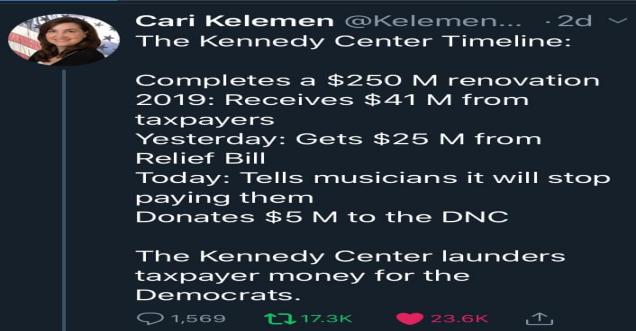 Multiple Fake news claims: A message viral on Social media claims, Kennedy Center Did NOT Give Democratic National Committee, $5M After Getting $25M In Relief From Coronavirus Stimulus

Yesterday: Gets $25 M from Relief Bill

Today: Tells musicians it will stop paying them

So the Kennedy Center gets 25M from the Wuhan virus bailout, tells its musicians it can’t pay them, then donates 5M to the democratic national convention DNC. This is wrong. corruption. It’s corruption when the republicans do it as well. Remove them all.
Update and edit as Stephen A Roberts points out.
This was reported as truth by some news organizations. It seems to be true: Kennedy center gets 25M
Seems to be true. Laying off musicians.
Not so true with a lame correction day later: Tweet

Completes a $250 M renovation
2019: Receives $41 M from taxpayers
Yesterday: Gets $25 M from Relief Bill
Today: Tells musicians it will stop paying them
Donates $5 M to the DNC

From the original tweet Cari Kelemen
@KelemenCari
·
Mar 29
To clarify, my original tweet should have said:
*Tomorrow* donates $5 M to the DNC.
It was meant as a next-step hypothetical based on the way the DNC has used Planned Parenthood to launder taxpayer money in the past. I did not intend to confuse anyone. Apologies if I did.” That’s quite an omission.

News Verification: Many Social media users fall into this fake news stating Kennedy Center gave $5 mllion after getting $25 million in relief from the government coronavirus stimulus package is not true.

The John F. Kennedy Center for the Performing Arts (formally called the John F. Kennedy Memorial Center for the Performing Arts, and commonly referred to as the Kennedy Center) is the United States National Cultural Center, located on the Potomac River, adjacent to the Watergate complex in Washington, D.C., named in 1964 as a memorial to President John F. Kennedy. Opened on September 8, 1971, the performing arts center is a multi-dimensional facility: it produces a wide array of performances encompassing the genres of theater, dance, ballet, and orchestral, chamber, jazz, popular, and folk music; offers multi-media performances for adults and children; and is a nexus of performing arts education.

There is no news report as of now that suggest government has given any relief package to any organiation or group.