Social media and local TV channels have creating fear among people by naming the virus as Tiranga or Red virus and regarding it as more dangerous than coronavirus. 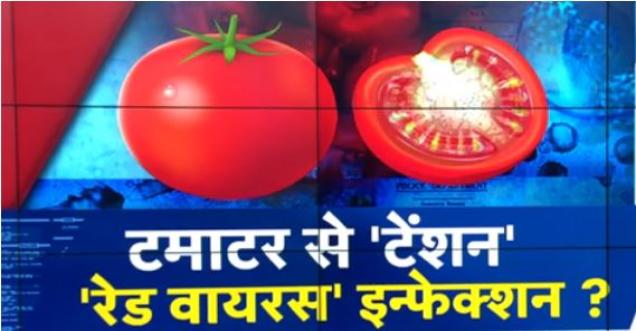 TRUTH & Verification: Farmers of Maharashtra in trouble due to a new disease these days. Along with the coronavirus, now news of virus entering the tomatoes have disturbed everyone. The tomato crop is being destroyed due to virus penetration. Thousands of acres of farming are getting spoiled. Farmers are calling it the 'tricolor virus'. Any vegetable is mostly incomplete without tomatoes. Maharashtra farmers are worried because of this news arising situation after coronavirus. About 60 percent of the crop in the State has been destroyed in the last 10 days.

Due to this, there is a difference in the color and size of tomatoes produced in tomato farming. Due to this virus, tomatoes are getting razed and blacken inside and start rotting. Due to yellow spots on the tomato, now its cultivation is under threat. One year the produce of Tomato may have to be stopped. Such a thing is also coming to the fore.

In the last few years, tomato cultivation has increased in Maharashtra during the months from February and April. Tomato farming is a cash crop. Farmers work hard for this farming. About one to two lakhs of rupees are spent on one acre of farming. In the tomato plants that were planted in February, it was seen that the tomatoes are turning yellow, later their color also turned white, spots started appearing. Tomatoes are rotting inside. The farmers of Sangamner and Akola are upset with the new virus in tomato. The 'tricolor virus' has been affected on the tomato of 5 thousand acres area of ​​Akola and Sangamner part of Ahmednagar district.

The farmers are blaming companies for allegedly selling diseased seeds. Social media and local TV channels have created fear among people by naming the virus as Tiranga or Red virus and regarding it as more dangerous than coronavirus. However, we do not have yet much information on the virus.

Farm activist Manish Jadhav of Mahagaon tehsil has lodged a complaint at the local police station, requesting cops to file an FIR against rumor mongers.

VERDICT: False, as the disease is mostly due to diseased seeds used for farming.