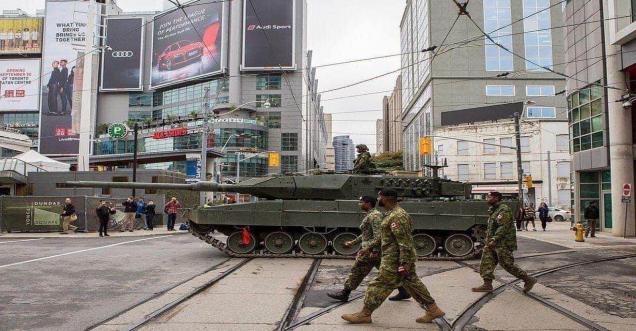 Multiple Fake news claims: An image has been viewed and shared thousands of times in multiple Facebook, YouTube and Twitter posts along with a claim that tanks being deployed to stop people from going outside the house in Toronto’s Dundas Square. on Victoria Street

Facts Check Verdict: False, the image shared is not new but taken during 2016 festival.

As part of the whole-of-government approach to fighting COVID-19, hundreds of Canadian Armed Forces members from Joint Task Force Central (JTFC) will be moving from their various units across the province of Ontario to CFB Borden. In Borden, these Forces will be forming a task force that will be centrally prepositioned on the base and kept ready to respond to future requests for assistance from the Government of Canada in the fight against COVID-19.