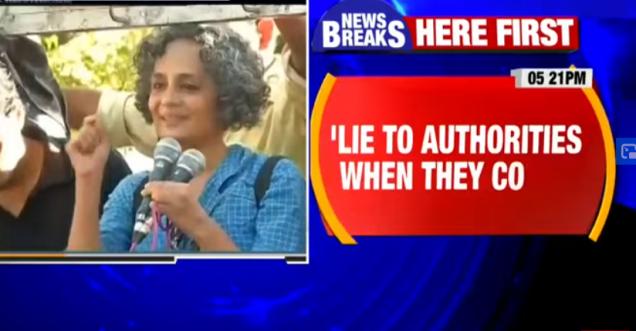 Fake news claim: Arundhati Roy, writer and activist Wednesday claimed that the National Population Register (NPR) will serve as a database for the National Register of Citizens (NRC), and asked people to oppose it by being lying.

Arundhati Roy says in an interview. 'Lie to Authorities when they come for a survey for NPR',  one thing is to refuse to participate in it. but, to factually lie and give false name's as far NPR is a concern is bound to be massive controversy.

News Verification: The writer Arundhati Roy who is quite known to be anti-BJP, urged Indian people to not be truthful while addressing a protest gathering at Delhi University, against the amended Citizenship Act, NRC and now the NPR.

Addressing a protest gathering at Delhi University, she also claimed that the National Register of Citizens (NRC) was targeted against the Muslims, the Left pro Writer said, “Now what is NPR? NPR has happened before. In NPR, they will come to your house, they won't ask you anything, they ask you for your name and phone number. It is a database for NRC. But we have to fight them for the next 4 years. Firstly, we should not give them four years, but we must have a plan. When they come to your house asking for your name, you give them some other name--like Ranga Billa, Kung-Fu Kutta, give your address as seven racecourse road and let's fix one phone number. But we need multiple subversion. We were not born for lathis and bullets," Arundhati Roy said. ”

Suzanna Arundhati Roy is an Indian author best known for her novel The God of Small Things (1997), which won the Man Booker Prize for Fiction in 1997 and became the biggest-selling book by a non-expatriate Indian author. She is also a political activist involved in human rights and environmental causes.

The NPR aims to collect a comprehensive database of every "usual resident" in the country, which includes the demographics and details of the individual. The NPR exercise will be carried out across states and union territories except for Assam