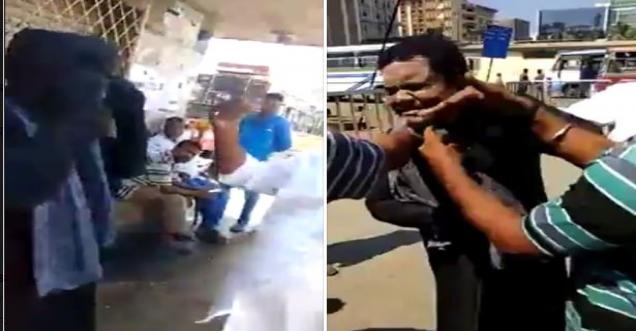 Viral Claim: Video of a BURKHA wearing man is viral on social media with a disturbing claim that Sanghi is trying to defame the Muslims by wearing Burkha.

The post can be viewed here and the archived version here.

Facts Check Analysis: The short video is of 3.41 seconds length, in the video the people are angry with the man wearing a women Burkha  and hiding himself from the others.  The man in the video wants to disguise himself as women.

In the first few seconds it is not much clear, actually what is happening. If you watch for few more seconds you can hear someone in the crowd saying “He entered the ladies toilet wearing a Burkha ”.

So this is the whole story of the video, the man in the video entered a ladies toilet wearing a Burkha . He doesn’t belong to any party or group, though he is mentally sick.

As per a news published on newindianexpress on Feb 17, titled as “Man held for entering ladies toilet wearing Burkha  in Goa”

PANAJI: Goa Police has booked a 35-year-old man for wearing a 'Burkha ' and entering the ladies toilet at the Panaji bus stand on Saturday.

The accused Virgil Bosco Fernandez was caught by alert passersby while coming out of a ladies toilet. Clad in T-shirt and jeans, Fernandez had reportedly donned a wig to look like a woman.