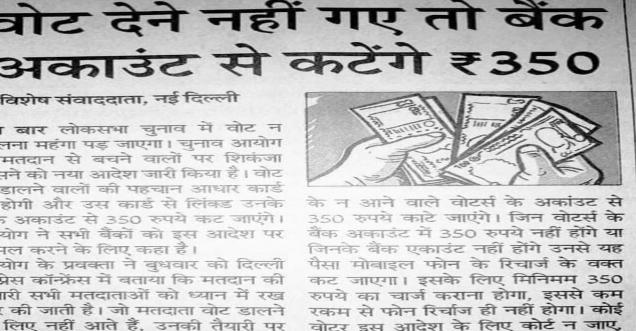 Viral Claim: A Picture widely viral on social media, which was published in Nav Bharat Times on March 21 stating that if this time the Lok Sabha elections are not voted, 350 rupees will be deducted from the bank account.

Facts Check Analysis: Nav Bharat Times  published satirical news in the special issue of Holi, on March 21  that “ if this time in the upcoming  Lok Sabha elections voters do not cast their vote,  350 rupees will be deducted from their bank account”. Though considered to be fictional and not real. It was written below the message, But many readers were confused about the truth of this news. The Election Commission has not issued any such order. If readers have any illusions about funny news, NBT regrets it. There is no truth in this news. Please take it as a joke on Holi.