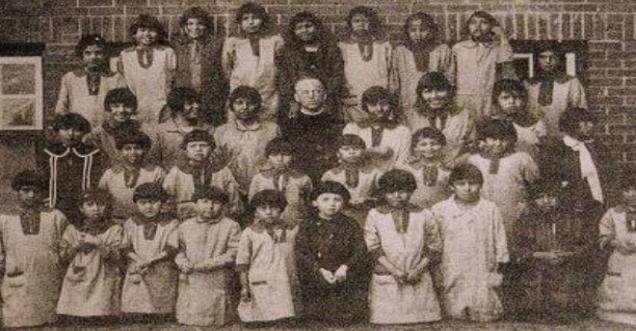 Fake news claim: An old image said to be from Canadian residential school, Mass Execution of aboriginal Children from the Mohawk Residential School located in Ontario, killed in 1943 and grave found in 2008.

Mass Execution of aboriginal Children from the Mohawk Residential School located in Ontario. They took all those children and stood them up next to a big ditch, then they shot them all and they all fell into the ditch. Some of the kids were still alive and they just poured the dirt in on top of them. Buried them alive.

Prisoners of the church. This mass murder happened in 1943 – in Brantford, Ontario, on land occupied by the Canadian Army, at its Basic Training Camp Number 20

Lorna McNaughton of Ohsweken, Ontario: is a survivor of the infamous “Mush Hole”, the Brantford Mohawk Indian residential school, run by the Church and Crown of England until 1970.

Why were these children shot?

The school was overcrowded just then. She was there, Lorna saw the army bring in all these cots for lots of new kids who showed up from all over the country. They must have just wanted to get rid of all the extra hungry mouths; it was wartime and everything was rationed. One day those new kids were in the dorms, then they were all taken out, and were never seen again.

A probable site of this mass burial of the executed children has been located and is now under the protection and jurisdiction of the Onkwehonwe Mohawk Nation and its clan mothers. #indigenous #aboriginal

The investigation into the Canadian Genocide continues.

They never stood a chance  :( Stories such as this should be inserted into Canadian history books for all to see, and not buried or covered up by the Federal Government. The Federal Gov't still have a lot to answer for, to our people!!!!

Mass Execution of aboriginal Children in 1943 , Mohawk Residential School , Brantford Ontario, Church of England (Anglican) operated . Children lined up next to a ditch, then shot. Some of the kids were still alive and dirt was poured in on top of them. Buried alive. pic.twitter.com/qOuZduBcYb

Verification: No doubt the images shared over the years are much similar to the kids in Canada’s residential schools. The post has been shared by more than thousands over the decade.

Many users are attached to the story put forward in the starting lines of the article shared, “Mass Execution of aboriginal Children from the Mohawk Residential School located in Ontario. They took all those children and stood them up next to a big ditch, then they shot them all and they all fell into the ditch.”

We did not find any news or article to suggest of any discovery of mass grave on the grounds of the former school where Kanien’ka:haka (Mohawk) children were interned, despite extensive archeological searches. There is not a single media report on this discovery.

It is one of the famous fake history that never happened.

The horror of residential schools is clear. However, I see no reference to anything like a "massacre" in the 2015 final report from Canada's Truth and Reconciliation Commission; reports about "mass graves" were also debunked in 2011 by the Six Nations Elected Council.

I haven't found any reports, unrefuted by Aboriginal authorities to support claims of killings at Mohawk or other residential schools.

Hence execution by firing party and burial alive of children at a residential school in Ontario did not happen.