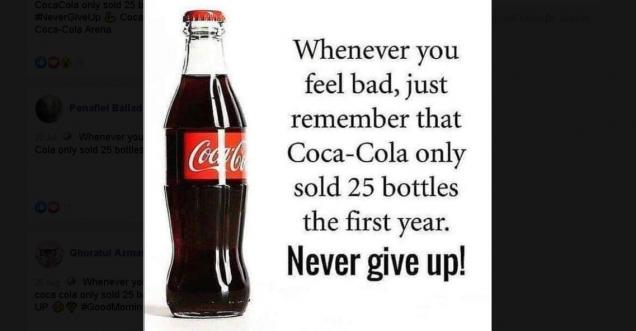 Fake news claim: The motivational message viral on social media over the years claims that CocaCola just sold only 25 bottles in its first year of production.

Have you ever felt that enough is enough!!!
That you have reached the end of your tether...

Whenever you feel bad, just remember that Coca-Cola only sold 25 bottles the first year.

Remember this; there is always a light at the end of the tunnel, just means you may have to run down there and light the damn thing yourself! 🕯

News Verification: Many users on social media shared and tweeted this quote assuming the information viral on the social media to be true. The viral message states that, “Whenever you feel bad, Just remember that CocaCola only sold 25 bottles the first year”, is not true.

Coca-Cola, or Coke, is a carbonated soft drink manufactured by The Coca-Cola Company. The Coca Cola company was formed in 1886.

The message share on social media is fake, since early in 1886 Coca Cola was sold in glass. The first sales were at Jacob's Pharmacy in Atlanta, Georgia, on May 8, 1886, where it initially sold for five cents a glass.

As per worldofcoca, The first servings of Coca‑Cola were sold for 5 cents per glass. During the first year, sales averaged a modest nine servings per day in Atlanta. Prior to his death in 1888, just two years after creating what was to become the world’s #1-selling sparkling beverage,

Coca-Cola history began in 1886 when the curiosity of an Atlanta pharmacist, Dr. John S. Pemberton, led him to create a distinctive tasting soft drink that could be sold at soda fountains. He created a flavored syrup, took it to his neighborhood pharmacy, where it was mixed with carbonated water and deemed "excellent" by those who sampled it.

Hence to do not believe in the fake motivation.