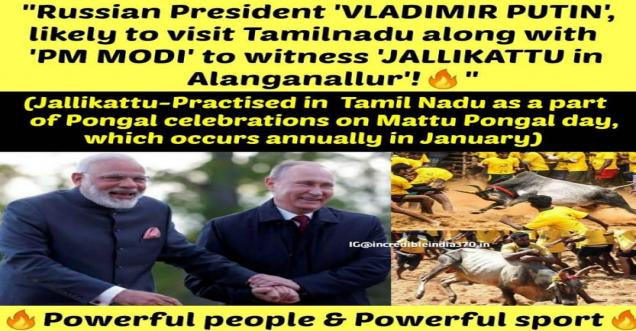 "Putin along with Modi to witness Jallikattu, This January here in Alanganallur, Tamilnadu!🇮🇳🔥"

Jallikattu-practiced in Tamil Nadu as part of Pongal celebrations on Mattu Pongal day, which occurs annually in January.

Earlier in the day a government functionary in Madurai district said that they had heard that Putin would visit Alanganallur (a village near Madurai) to see the event along with PM Modi in January 2020.

Facts Check Analysis: No the Russian President Vladimir Putin is not visiting Tamil Nadu with Prime Minister Narendra Modi, for the Jallikattu event organized every year.

Jallikattu is part of the three-day Pongal festival and derives its name from Tamil words ‘salli’ meaning coins and ‘kattu’ meaning package. Jallikattu is a sport, played as a part of Pongal (harvest festival dedicated to Sun God) celebrations, where a bull is let loose into a crowd of people. The participants are supposed to take control of the bull by holding its hump as long as they can.