A video shared by JMCloutNewz on YouTube stated that Simpsons predicted the death of George Floyd’s death back in 1990. 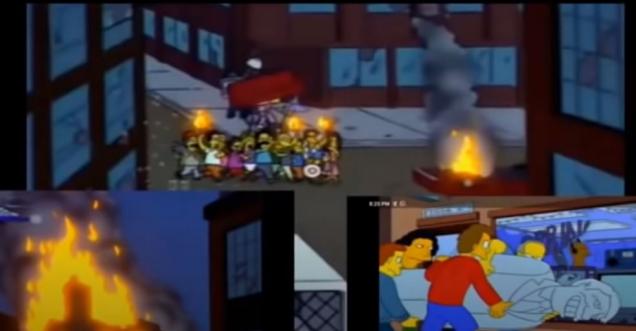 News CLAIM: A video shared by JMCloutNewz on YouTube stated that Simpsons predicted the death of George Floyd’s death back in 1990.

TRUTH & Verification: Picture going viral on social media that the Simpsons, favorite TV cartoons in the 1990s, showing the death of George Floyd’s death. The screengrab from the series showing a black man being pressed on the neck by the knee. The background image shows images from the favorite Simpsons character.

The image being shared is not old but was recently created and uploaded in an Instagram account by yuripomo, to show protest against George Floyd’s death.

Normally you’re used to see colorful and cheerful drawings from me, but since i’ve got quite a good audience, i’d like to use it as much as i can in the right way when the situation requires it, and bring something good, and useful with my drawings, and you guys know it. Especially in this exact moment. With this piece i’d like you to think deeply, Taking the chance to bring The Simpsons as an example for the cause. The Simpsons has always been everyone’s childhood, so the message will be clear and strong enough i suppose. Imagine you’re sat with you daughter/son watching the Simpsons, and all of a sudden this scene happens in the show, as cruel as it has been, no jokes, no irony, nothing that the Simpsons normally has, and what it’s loved for. Imagine that, how would you feel? ... Think about that deeply, and give yourself an answer, no need to add anything else! 🙏🏻 • • • • • • #noracism #georgefloyd #justiceforgeorgefloyd #ripgeorgefloyd #georgefloyd🙏🏾 #noracismo #equality #humanrights #art #artist #simpsons #simpson #thesimpsons #illustration #illustrationartists #digitalart #digitalillustration #yuripomo #cartoon #cartoonist #icantbreathe #blacklivesmatter #blacklives #blacklivesmatter✊🏾 #blacklivesmatters #racism #colinkaepernick #riots

There are many other cartoon images drawn to depict the racist behavior by the police.