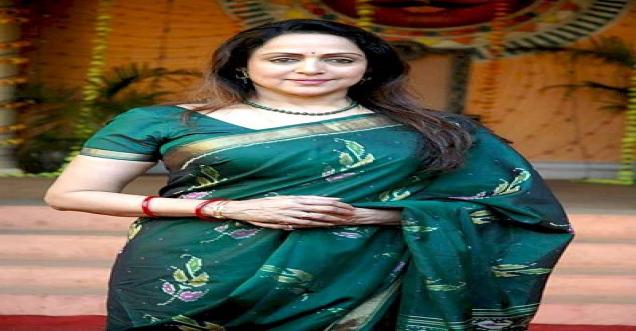 Viral Claim: A viral news is doing the round in social media where Bollywood actor and BJP leader Hema Malini can be seen with a sickle in the hand, cutting grain for the upcoming Lok Sabha elections.

Gosh - so much progress under Modiji! Women farmers are provided helicopter services to go to their fields for harvesting!

Began my Lok Sabha campaign today with the Govardhan Kshetra where I had the opportunity to interact with women working in the fields. A few fotos  for u of my first day of campaign pic.twitter.com/EH7vYm8Peu

Bollywood actress and BJP leader Hema Malini's two photos are making news  on social media where Hemamalini landing by the helicopter and harvesting crops. The message is becoming viral in whatsapp, Facebook, tweeter and other social media.

The message is becoming viral with both photos that 'Modi ji is proud of. Helicopters are being given to women farmers, which are reaching the farm, while the other user wrote that 'helicopter farmer Hema Malini' during the campaigning of Lok Sabha elections, many such photographs are getting vir

When we search both the pictures in reverse image on Google we found that it was uploaded on Hema Malini's Twitter account on October 2015. With the picture she wrote that 'The second day of the campaign is about. From Patna '. It is clear that the picture of the helicopter belongs to Patna.

Gosh - so much progress under Modiji! Women farmers are provided helicopter services to go to their fields for harvesting! 🤣 pic.twitter.com/lxXCCcLwRt

The second photo is from 10 April 2014. In the 2014 Lok Sabha election, Hema Malini was BJP's candidate from Mathura.

According to our Investigations it is revealed that Hema Malini's pictures on the basis of which she is claiming that she is harvesting from the helicopter is cutting is a fake.
Tags Hema Malinichopping cropsloksabha election