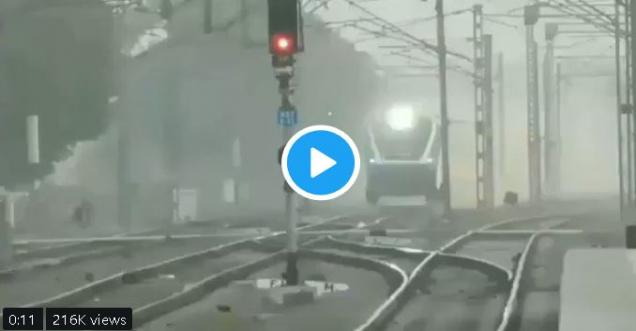 Viral Claim: Piyush Goyal compares Vande Bharat Express as airplane, the question is is the train faster than airplane, or is this first time published original video either.

Facts Check Analysis: The Railways and coal minister, who is also presently the interim Finance Minister, Piyush Goyal has given a Goosebumps, after he gave a glimpse view of the Vande Bharat Express train, which zoomed past the camera. Vande Bharat Express is India’s first semi high speed train built under Make in India.

Train 18, which is said to be India’s fastest train once it hits the tracks, was renamed ‘Vande Bharat Express, a week ago. The Vande Bharat Express has the capability of speeding up to 180 kmp/h, something which duly happened in its trial run.

The 16-coach train was built in 18 months at a cost of Rs 97 crore by the Integral Coach Factory, Chennai. The train will run between Delhi and Varanasi, and will have stoppages at Kanpur and Allahabad stations.

What speed does a plane fly at?

What is the maximum speed of a passenger plane?

Maximum cruising speed is 700 miles per hour and service ceiling is 51,000 feet. The plane can climb at a rate of 3,650 fpm. The Concorde was a turbojet powered supersonic passenger airliner, or what is called as the supersonic transport, or SST.

Picture taken from the screen grab of the tweet by Piyush Goyal, You can see the passengers sitting on the platform

So actually the speed of the video has been increased and the original video is much slower than the one tweeted by Piyush Goyal. Though it is fast but we can’t compare it to an airplane or a bird even.
All the major online news media were gaga over the train without knowing the facts about the train 18, now known as Vande Bharat Express.